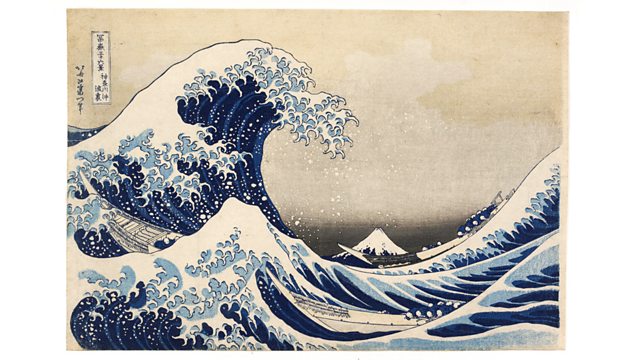 Neil MacGregor is exploring mass production and mass consumption in the 19th century. Today he is in Japan - with Hokusai's famous print, The Great Wave.

The history of humanity - as told through one hundred objects from the British Museum in London - is once again in Japan. This week Neil MacGregor, the museum's director, is looking at the global economy in the 19th century - at mass production and mass consumption. Today he is with an image that rapidly made its way around the world - Hokusai's print, The Great Wave, the now familiar seascape with a snow topped Mount Fuji in the background that became emblematic of the newly emerging Japan. Neil explores the conditions that produced this famous image - with help from Japan watchers Donald Keene and Christine Guth.

'Under the Wave off Kanagawa' ('The Great Wave') is probably the most iconic Japanese artwork in the world. It depicts a monstrous wave about to come crashing down on three fishing boats and their crews. On the horizon is Mount Fuji, dwarfed by the colossal wave. The print was created by Hokusai when he was about seventy years old, as part of his Thirty-six views of Mount Fuji series. The print was made using colour woodblock printing and many thousands of impressions were made - each one sold quite cheaply.

How did The Great Wave become one of the most famous images in the world?

When The Great Wave was first issued, in about 1830, Japan's contact with the outside world was strictly regulated. It was only in 1859 when Japan, under pressure from America and other powers, opened a few of its ports that Japanese prints began to be exported to Europe. They were quickly discovered and celebrated by European and American artists like Whistler, Van Gogh and Monet. The Great Wave inspired Debussy's symphonic sketches La Mer and has become one of the most iconic images of the power of the sea.

'The Great Wave' is actually a view of Mt Fuji, one of a series of colour prints Hokusai designed about 1830 called Thirty-Six Views of Mt Fuji. The mountain has always been considered sacred and some of the original purchasers of the print, ordinary townspeople, were believers in the so-called 'Fuji cult'. They periodically made group pilgrimages to climb the mountain; although only men were allowed to go all the way to the top.

Mt Fuji is by far the highest mountain in Japan, but in Hokusai's print it is relegated to the far distance and dwarfed by the gigantic wave in the foreground. The spray from the wave starts to look like snow falling onto the peak of the mountain, a visual joke.

The eccentric composition of the print is a bravura display by Hokusai to show how he has digested supposedly 'rational' European-style perspective and made something much more dramatic and exciting out of it. When European artists and collectors began to discover and celebrate the print in the late nineteenth, they may well have been responding - consciously or unconsciously - to this European-influenced way of seeing that was deeply imbedded in the image.

Publisher Nishimuraya had craftsmen make many thousands of impressions of the image from sets of wooden printing blocks, maybe as many as 5,000-8,000. Gradually the blocks started to wear out and get damaged. So ideally one wants to see a relatively early impression, before the lines start to get blurred or broken and when the colours are still fitting neatly inside the outlines of the design. The fine, early impression recently acquired by the British Museum, although somewhat faded, is otherwise very sharp and fresh. You can see a unique woodgrain pattern in the black sky either side of Mt Fuji and there is the vestige of a pink cloud at the top.

Famous for being famous

By Christine Guth, School of Oriental and African Studies, University of London

It is interesting that it’s been picked up as a kind of brand and it’s hard to know exactly why that is, I think it’s sort of like celebrity. Celebrities are famous because they are famous. It’s something that everybody recognises. But I think in the context of Japan it takes on a slightly different connotation today, for example, a lot of railway tickets will feature a simplified version of The Great Wave in summer time because it’s a summer motif, it suggests coolness, it suggest freshness in the steamy days of summer.

So that is certainly one reason why it is very popular, but it’s also such a catchy thing - its great sweeping form, it’s so appealing. There are some images one gets rather bored with after a while, but this is one which I think, for reasons that are not easy to explain, doesn’t seem to get clichéd quite as much as say the Mona Lisa or something else, which is certainly as or as much as famous.

I think many people see it as representative of Japan. When you say ‘Great Wave’, you say ‘Oh yes! Japanese art’, but within Japan, what you need to recognise is that within Japan woodblock prints weren’t seen as art they were seen as a popular form of expression and commercial printing. So for a very long time Japanese government officials, Japanese art historians were not happy about the attention that print culture garnered in the West and art historians or the cultured elite wanted Europeans and Americans to look at different kinds of things and not look at this as representative.

I think that one of the things that has all too often been passed over in writing and talking about the Great Wave is what it says about Japan’s connectedness during the 1830s.

It is often argued that Japan was cut off from the world during this period, but that is not in fact the case there was an enormous enthusiasm for things exotic, for things from abroad during this period. Whether things from China or things from Europe. And one of the reasons that Hokusai’s Great Wave became such a success was that it was printed in an exotic new colour that had a saturate hue that was unknown until that time. And this colour was imported and was synthetic and is colour that we now know in English as Prussian blue or Berlin blue, and this says a lot about the way in which Japan was connected through trade to China and to the world beyond.