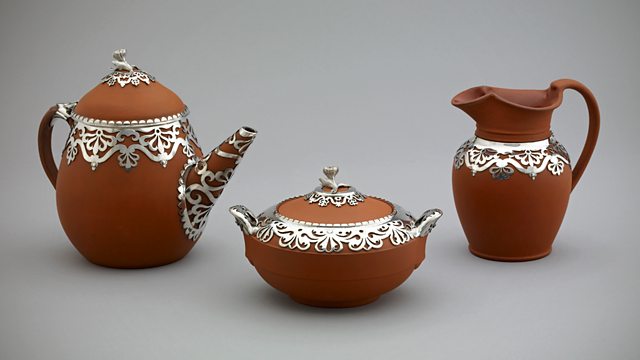 Neil MacGregor's world history through objects. This week he is exploring the global economy in the 19th century. Today, the story of Britain's favourite drink - with a tea set!

This week Neil MacGregor's history of the world is looking at how the global economy became cemented in the 19th century, a time of mass production and mass consumption. He tells the story of how tea became the defining national drink in Britain - why have we become so closely associated with a brew made from leaves mainly grown in China and India? The object he has chosen to reflect this curious history is an early Victorian tea set, made in Staffordshire and perfectly familiar to all of us. The historian Celina Fox and Monique Simmonds from Kew gardens find new meaning in the ubiquitous cuppa.

This tea set was made by the famous Staffordshire pottery frm founded by Josiah Wedgwood. It is made of red stoneware, which came to Europe from China via Holland in the 1600s, and can withstand hot water. Tea was initially a luxury product but by 1830 it was increasingly drunk by everyone in Britain using mass-produced pottery and porcelain. Historically this set has been associated with Queen Adelaide (1792 - 1849), wife of William IV. Although simple and originally moderately-priced, the pieces have been ornamented with silver to make them more prestigious and desirable.

How did drinking tea become a patriotic duty in Britain?

Vast geopolitical forces lie behind the creation of this simple tea set. In Britain between 1840 and 1900 the consumption of tea and sugar quadrupled. Mass consumption required mass production on an industrial scale and huge tea plantations were developed by the British in India and Sri Lanka. New sources of sugar were also developed, reducing the role of the former slave plantations in the Caribbean. Tea drinking was regarded as patriotic as it supported British trade and empire, unlike wine and coffee, beverages of imperial rivals.

By Professor Christopher Bayly, Director of the Centre of South Asian Studies, University of Cambridge

This elegant tea set was probably made for an aristocratic or even royal household. But this object and its manufacturer, Wedgwood, were emblematic of Britain’s own transformation from the ‘polite and commercial society’ of the eighteenth century to the mass consumer society of the nineteenth. The tea set became a desired item for middle and working class households as the custom of sociable family tea parties spread across society and Wedgwood’s tasteful designs, but mass production techniques, flourished along with it.

Yet the wider history of tea consumption belies this picture of domesticity. In the mid-eighteenth century, tea began to edge out coffee as the sociable drink. It was thought to be lighter and more health-giving. Yet China’s black and green teas, produced in its central provinces and transported down to Canton (Guangzhou), the Qing Empire’s only ‘open’ port, were the main source for European and American consumers. The tea of Assam and Ceylon only came on-stream in the 1840s and after. It was the English East India Company which monopolised the trade, bringing tea westward in exchange for silver and later, Indian raw cotton. Cotton was one of the few commodities the Chinese Empire needed, as its population outgrew local sources of supply.

Then war and politics brutally intervened. The company’s American market was suddenly destroyed after American patriots revolted against the tea taxes imposed by Britain and stormed its ships in the famous ‘Boston tea party’ of 1773, hastening the American War of Independence.

When the United States became independent in 1783, the East India Company lost its foothold in America, just at the time when its military costs were rising as it invaded larger and larger areas in India itself. Bankruptcy loomed, but this national champion was ‘too big to fail.’ William Pitt’s government intervened and reduced the duties on tea to a fraction of what they had been.

This was what caused the surge in tea drinking in Britain and ultimately made Wedgwood and other pottery- makers a fortune. But what was there to sell to the Chinese to supply the rising demand? Silver supplies had dwindled and the demand for raw cotton was erratic.

Opium, however, was another matter. It made its own market. It was grown in western India, which the British now controlled, and sold in China through Canton. The opium habit spread from the court to the aristocracy and to ordinary people, like a sinister version of tea in Britain. A huge illicit trade developed and the Chinese authorities became worried as labourers and the army were infected. The situation reached breaking point when the Company lost its monopoly in 1834 and private merchants, British and Indian, piled into the trade, flooding the China coast with opium. In 1839 Commissioner Lin Zexu marched to Canton and destroyed the British opium ships. So began the First Opium War of 1839-42 and the beginning of China’s long humiliation.

Two hundred or more years later the Boston Tea Party and the Opium War still haunt world politics. Behind the domestic tranquillity of this pretty tea set lies a history of warfare and exploitation.

Three objects that changed the world

Tea had been drunk in England since the seventeenth century but only really by the classes that could afford it because duties were so high that it became a sort of socially high caste activity, especially for ladies. It was about polite sociability and entertaining your friends around the tea table, but they carefully locked up their tea in tea caddies.

But by the late eighteenth century, Pitt the Younger realized he could get quite as much duty if he lowered the duty on tea and then more people would drink it, and so gradually from the 1770s through to the 1830s the duties on tea were coming down, and you could say by the time this teapot was manufactured, it was in reach as a drink for the working people.

Tea drinking takes off in a massive way in the nineteenth century.

It’s pretty widespread, because of course by that time you’ve got distribution. You’ve got tea merchants all around the country, you’ve got the railways distributing it, and it’s generally available. You’ve got packaging, you’ve got individual companies: Brookebond is starting around this time; Lipmans, all of these people are really joining the older tea merchants like Twinings and Fortnum & Mason who started in the eighteenth century. So the whole market is growing, growing, growing.

Temperance was huge; drink and the Victorians was a very big issue. The desire to have a working population that was sober and industrious was very strong, and there was a great deal of propaganda to that effect. It was tied in with dissent, Methodism and so on – sobriety, and tea really was the drink of choice.

The middle classes have been exploding away in Britain since the eighteenth century, and the population of Britain is growing massively, and it’s becoming increasingly urbanised, but I think you can just say it’s a huge population growth in Britain at this time.

London is the largest city in the world, and you’ve got a massive increase in birth rate and the death rate means that the population is growing enormously. The British navy was everywhere, and what the British Navy wanted the British Navy usually got, and the result is that it was able to control these massive movements of goods into not only the London docks but also the other docks, the Liverpool and Bristol and all round the country, Glasgow.

Yes, you could say they did change the face of the world, for this tiny country off Western Europe.