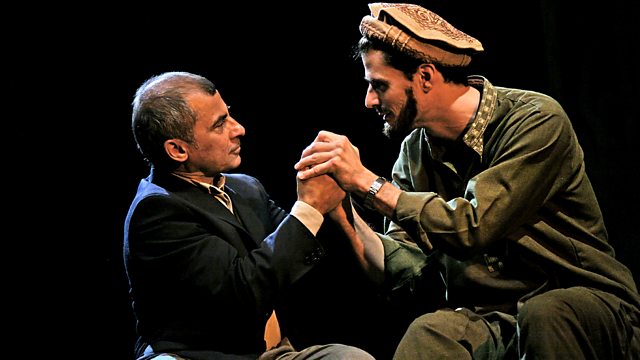 A sequence of four plays tracing the history of the war in Afghanistan from the 1840s to the present day, introduced by Robin Lustig.

'Bugles at the Gates of Jalalabad' by Stephen Jeffreys

In January 1842 a contingent of British soldiers, 16000 strong, retreated from Kabul. Only a few stragglers were left alive in the British Army's worst defeat in history. The General's wife, Lady Sale, documents the battles in the Hindu Kush; whilst four buglers sound the advance at the gates of Jalalabad as a signal to any survivors.

'Miniskirts of Kabul' by David Greig

The Taliban are closing in on Kabul: shells and rockets are exploding around the capital. A woman is interviewing
President Najibullah, who has sought refuge in the UN compound. He talks about fashion, communism, torture and whisky, but time is running out.

While civil war rages, a lone CIA agent realises the dangers of American disengagement. He's found an 'in' to persuade Commander Massoud, the Lion of Panjshir, to help them get back into the game. But with the Taliban closing in on Kabul, will it be enough?

'Canopy of Stars' by Simon Stephens

In a bunker guarding the Kajaki Dam, two soldiers talk of chips and gravy, football, women and whether the British should start to negotiate with the Taliban insurgents. A searing insight into soldiers at war, and what happens when they go home.

'What a day, what a theatre, what a company. This is theatre to be proud of.' Sir Tom Stoppard

'Its scope is unparallelled. It's a fine achievement.' The Times

The Unfortunates, by BS Johnson