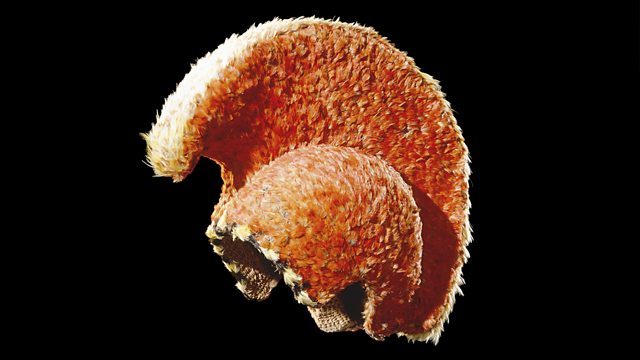 Neil MacGregor's world history is examining the relationship between Europe and the rest of the world in the 18th century. Today he is with a feathered helmet from Hawaii.

This week Neil MacGregor's history of the world is telling the story of European encounters across the globe during the 18th century.

Today he finds out what happened to Captain Cook as he was mapping and collecting in the Pacific. Neil tells the story through a chieftain's helmet made from a myriad of colourful bird feathers that was given to Cook when he landed in Hawaii in 1778. This is not a story with a happy ending. The anthropologist Nicholas Thomas and the Hawaiian academics Marques Hanalei Marzan, Kyle Nakanelua and Kaholokula help describe Cook's impact in the Pacific and the meaning of the feathered helmet.

This feather helmet would have been worn by a Hawaiian chief during a ceremony or in battle. It is made from wicker basketry and covered with the red feathers of honeycreepers and the yellow feathers of honeyeaters. Red and yellow were the Hawaiians' most important colours and were regarded as tapu - holding a sacred quality. Feathers enhanced mana - a spiritual force that can fill individuals or objects with power. Birds were regarded in Polynesia as spiritual messengers.

This helmet was probably collected in 1778 by Captain Cook or a crew member of his ship. They were the first Europeans to ever visit Hawaii. The Hawaiian Islands were first settled in around AD 400 but had probably been isolated from the rest of Polynesia for 500 years when Cook arrived. The arrival of Europeans proved to be highly influential. Kamehameha I modelled himself on European monarchs and was able to conquer and unite all the islands independent until the American takeover in 1893.

Featherwork throughout the Pacific and Polynesia in general is very significant and associated with the high chiefs or the chiefly line in all of the Polynesian cultures.

In Hawaii, red is used prominently in feather work, in helmets, in feather capes, but also yellow becomes a very prominent colour as well that stands alongside the red because of its rarity and colour.

The primary feathers that are used in this particular mahiole are from two birds. The red feathers coming from the i’iwi bird which is a honeycreeper in Hawaii - which is still living in forests around the island chain. The yellow feathers and the black as well come from a bird called the oo which is no longer living in the Hawaiian islands. I think the last Hawaiian oo was last heard in the Hurricane Iniki which was about 15 years ago.

Also the materials used - because the chief was a God on earth - the materials used are earthly forms of our Gods. For example the ie’ie which is for Ku, wicker material, the feather work, the colour red, Ku, for the God Ku, for the god of politics, war but perhaps other things as well, the God of life. So it’s a symbol of a core status, a godly status on earth and so that’s what separated them from the commoners. Hence, the term mahiole.

In Hawaii the yellow feather becomes on par if not a little more elevated than the feather just because of the scarcity of that particular source of material. The yellow feathers come from a small honey eater which is primarily black with a few tufts of yellow feathers under their wings and tail. So to acquire enough feathers of that colour to make something, to decorate your feathered cape or your feathered helmet in a significant manner would require a lot of resources or a lot of control of land to acquire that much resources to make something of significant size. Yellow is a very prominent colour used but the traditional colour of the chiefs originates with the red.