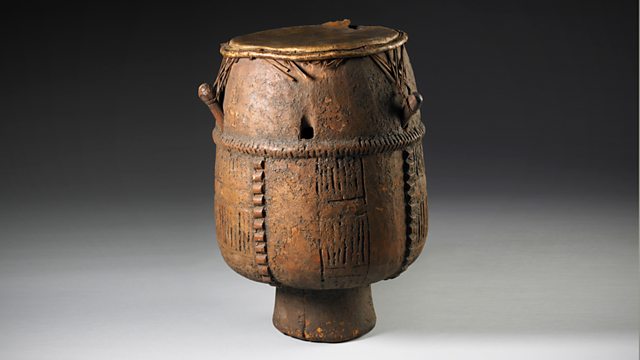 Neil MacGregor is exploring the often troubled relationship between Europeans and the rest of the world during the 18th century. Today he is with an African drum taken to America.

Neil MacGregor's history of the world as told through things that time has left behind. Throughout this week he is examining the often troubled relationship between Europe and the rest of the world during the 18th century.

Today he tells the extraordinary story of a now fragile African drum. It was taken to America during the years of the slave trade where it came into contact with Native Americans. The drum was brought to England by Sir Hans Sloane, whose collection became the British Museum in 1753. This drum, the earliest African-American object in the Museum, is a rare surviving example of an instrument whose music was to profoundly influence American culture - bought to America on a slave ship and transported to Britain by a slave owner. The historian Anthony Appiah and the writer Bonnie Greer consider the impact of this drum.

This drum is one of the oldest surviving African-American objects. The drum was collected in the early 1700s in the Colony of Virginia, now part of the United States of America. The drum, however, was made in the Akan region in Ghana, West Africa, where it would have been played during religious ceremonies and on social occasions. The drum probably travelled across the Atlantic on a slave ship, where it may have been used to exercise the enslaved Africans in an attempt to keep them healthy.

What is the musical legacy of drumming in plantations?

It is estimated that over 12 million Africans were transported to the Americas between 1501 and the abolition of the slave trade in the 1800s. They were brought to provide labour for mines and for plantations of sugar and rice, and later tobacco and cotton. Drumming and other African musical traditions continued in the colonies and gave rise to many different kinds of music including shouts, hollars, work songs, fife and drum and spirituals.

Something like 12 million people probably were taken from Africa to various parts of the new world. A lot of them went to Brazil in the southern hemisphere and many went to the Caribbean and North America.

In a way the reason it was possible for people to be taken in this way was that when Europeans first arrived in significant numbers on the West African coast they were coming in a period when there was a fair amount of internal warfare and displacement and some of the larger settled empires of the period that corresponds to the middle ages in Europe had sort of broken down and so there were large numbers of war captives, and there were internal systems of slavery - people used captives on farming plantations and as domestic slaves. When the Europeans arrived on the coast that was one of the commodities, one of the things that they picked up.

The trip across could take anything from about six weeks to six months, it’s quite hard going across the Atlantic by sail and so they went in pretty horrendous conditions. They were mostly chained together in pairs, especially the men below deck. They didn’t get to see much of the outside while they were travelling, they were let up occasionally to breathe the air but mostly they were below deck. They were shackled together and laid in very densely packed, sort of like, if you look at the drawings that were done by the anti-slavery people they looked like sardines or something they were so tightly packed. So of course as a result they got sick, many died, many tried to kill themselves because they didn’t know where they were going, they’d been taken away from their societies, they didn’t know what was happening to them and so often if they did allow them on deck they would jump into the sea.

So it was pretty horrific, and it was made possible as I say by the internal conflicts in West Africa at the time the Europeans arrived.

How and why was this drum taken from West Africa to Virginia, and how did it become part of Sir Hans Sloane’s collection? Asking these questions raises crucial issues about the role of material culture in the formation of African-American societies.

Drums were enormously potent objects in African-American worlds in the era of the slave trade. They were used on the middle passage in forcing Africans to exercise, preserving them for slave labour, and the Akan drum may have reached Virginia in this manner.

Appropriating musical instruments for coercive means, however, allowed them to circulate as cultural resources for Africans. Sloane had recorded slaves’ music while in Jamaica, and collected an African “strum strum” or guitar. African-Americans often played guitars with drums, and drums became seen as particularly dangerous, inspiring a sense of identity and community, and fomenting rebellion.

Planters did not know if tolerating such performances strengthened or undermined slave societies, but Sloane noted that such instruments were often banned, though they evidently did not disappear. What would the Akan drum have meant to him?

Sloane amassed a unique collection of slave artefacts in the eighteenth century: tools, clothing, whips, nooses, weapons, and anatomical remains. Most of these objects, however, were gifts from correspondents. Conveying objects as gifts involves the judgment of others as to the collector’s desires, so this shows us that many contemporaries judged Sloane, the Caribbean’s most famous natural historian, to have an active curiosity about slavery and slaves.

The twist here, however, is that both the Akan drum’s donor (a “Reverend Clerk”) and Sloane identified this instrument an “an Indian drum,” not an African one. This shows how, even though their true identities might be submerged, African objects survived and circulated even as slave traders sought to reduce their makers and users to chattel.