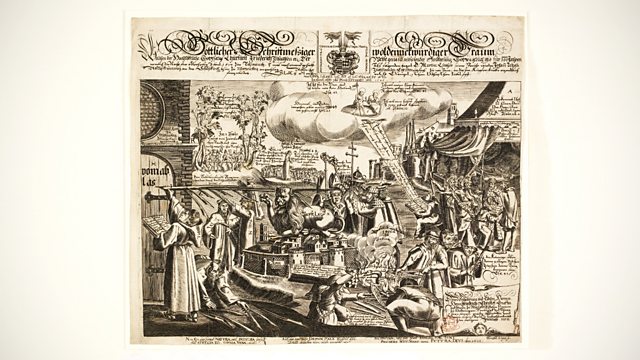 Neil MacGregor is exploring the co-existence of faiths around 400 years ago. Today - a woodblock print marking a hundred years of the Protestant reformation.

Neil MacGregor's world history as told through things that time has left behind. This week Neil is looking at the co-existence of faiths - peaceful or otherwise - across the globe around 400 years ago. So far he has looked at objects from India and Central America, Iran and Indonesia that embody the political consequences of belief. Today he is back in Europe, with a document that marks an anniversary and that is designed to raise morale. It's a woodblock print, a broadsheet, commissioned in Saxony in 1617 to mark a hundred years of the Protestant reformation and anti Catholic sentiment. Neil describes the broadsheet and the uncertain Protestant world that produced it. Was this the first time that an anniversary was commemorated in this way, with a kind of souvenir? The broadcaster and journalist Ian Hislop considers the broadsheet as an early equivalent to the tabloid press while the religious historian Karen Armstrong describes the reforming motivation that the broadsheet celebrates.

This broadsheet commemorates the 100th anniversary of the Protestant Reformation of the Christian Church. It depicts Martin Luther nailing his thesis to the door of Wittenberg Cathedral in 1517. Protestants regarded this moment as the start of the Reformation, when the new Protestant Church, opposed to the power of the pope, split from the Roman Catholic Church. Luther is shown writing on the door with a huge feather pen that knocks off the pope's hat. The lion is a reference to the pope's name - Leo X.

What is a broadsheet?

Broadsheets were sheets of paper used to spread news and political messages. They played an important role in the Protestant Reformation and the Catholic Counter Reformation. Depictions of Luther at Wittenberg helped to popularise this event in the Protestant imagination. In reality, Luther probably didn't actually physically nail his thesis to the Cathedral door. This broadsheet was made in 1617 on the eve of the Thirty Years War between the Catholic and Protestant countries of Europe. During this unstable period this broadsheet would have reminded Protestants of past victories.

The first author of international fame

This print of 1617 shows a dense composition of closely-packed figures entwined with beautifully designed lettering, which to a contemporary audience, used to stark headlines and the immediacy of photography and film, looks confused and complicated.

Broadsheets such as this, however, represent an early form of mass communication.
Since the fifteenth century, the traditional method of narrating stories to a semi-literate audience was to show important events in sequence in the manner of a strip cartoon.

Luther, the main subject here, appears several times to show the part that he played at different points of the story: in the background he literally receives the word of God in a torrent of letters seen pouring into his book, and to the right of the print he appears to Friedrich the Wise in the dream. On the left he is seen inscribing his theses against the sale of indulgences on the church door; an event of 1517 when Luther publicly challenged a much-hated practice of the Catholic Church.

One hundred years later, Protestants chose to commemorate this episode as the beginning of the Reformation.

The most striking aspect of this print is the enormous size of Luther’s quill pen which strikes through the lion, a visual metaphor for Pope Leo, and then knocks the pope’s tiara off his head. Luther’s supporters are shown pulling feathers from his quill pen, as if to be inspired by his words. Together with the elaborately engraved title, Luther’s large pen emphasises the significance of the written word to the circulation of his ideas.

His works were published in German to appeal to as wide a public as possible, as opposed to Latin, the language of the Catholic Church and of scholars and academics. Hundreds of thousands of his sermons were published. Martin Luther was, in effect, the first author of international fame.