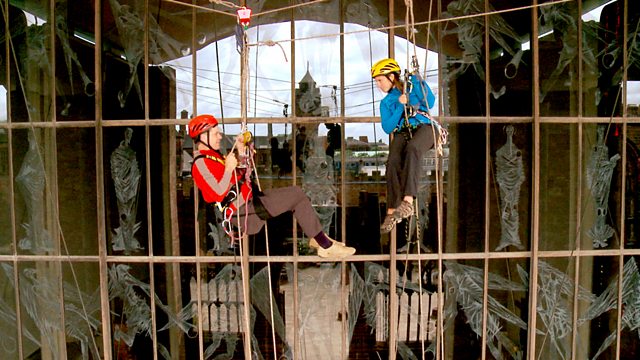 Dr Jonathan Foyle, architectural historian and novice climber, scales Britain's most iconic structures, from the Normans to the present day, to reveal the buildings' secrets and tell the story of how our architecture and construction have developed over 1,000 years.

The next step of Jonathan Foyle's journey takes him to Coventry Cathedral. Built in 1955 after the original cathedral was bombed in the war, this modernist masterpiece came to symbolise the hope and rebirth of a nation.

Jonathan, aided by top climber Lucy Creamer, abseils 295 feet between the ruins of the old and new cathedrals to explore how Basil Spence's experiences fighting on the beaches of Normandy shaped his design for the cathedral. On his climbs throughout the building, Jonathan scales the cathedral's immense etched window that utilised the most cutting-edge techniques in its creation and reveals why it's called the west window when it sits in the south of the building. He discovers a world-record-breaking 74-foot-high tapestry that weighs nearly three quarters of a ton and incorporates 1,000 different shades of wool, and reveals how a trip to the dentist defined one of Coventry's most striking features.