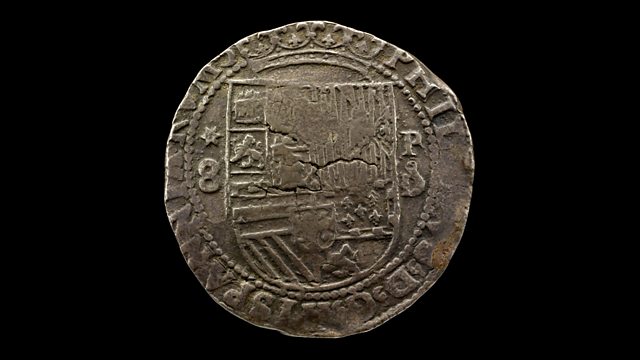 Neil MacGregor is this week focusing on European encounters around the world between 1450 and 1600. Today he is with the with the first truly global money - silver pieces of eight.

Neil MacGregor's world history as told through things that time has left behind. This week he is exploring the world between 1450 and 1600 - looking at what was happening in South America, Africa and Japan at the time of the great European age of discovery. He has looked at the new ocean going galleons that were being built in Europe at this time and today he describes the money that was being used to fuel the great new trade routes of the period. He is with pieces of eight, little silver coins that by 1600 could have been used in many countries around the world. Neil describes Spain's dominance in South America and their discovery of a silver mountain in Potosi in present day Bolivia. He describes the process by which pieces of eight turned into the first truly global money. The Bolivian former head of a UNESCO project in Potosi describes the conditions for workers there today and the financial historian William Bernstein looks at how these rough silver coins were to shift the entire balance of world commerce.

Pieces of eight were the world's first global currency. As the coins of Spain they were used across the vast Spanish Empire, stretching from South America to the Philippines, but were also used outside the empire as well. In 1600 one coin would have been worth the equivalent of a modern £50 note. The front of the coin is decorated with the coat of arms of the Habsburgs, the rulers of Spain and the most powerful family in Europe.

Where did the silver for pieces of eight come from?

The inscription on this coin - King of the Spains and the Indies - refers to European Spain and the great new Spanish Empire in the Americas. The silver used to create the coins and finance Spain's armies and armadas came, above all, from the 'silver mountain' of Potosi in Bolivia. This wealth came at a terrible cost to human life. Thousands of indigenous American Indians and African slaves died in the brutal conditions of the mines to support Spain's thirst for silver.

"Give me a child until he is seven and I will show you the man," was supposedly said by the founder of the Jesuits, St Ignatius Loyola, though it probably ranks among the most misquoted, misrepresented and abused quotations in the book. Still, there is a basic truth, in that something fixed firmly in the mind by that age is unlikely ever to go away.

It’s all down to Robert Louis Stevenson, and his classic adventure story, Treasure Island. The pirate Long John Silver’s parrot squawks ‘Pieces of Eight!’ repeatedly, and thanks to film and TV versions - which might well be more familiar than the book itself – it probably ranks among the world’s first great catch-phrases. In the last decade, Pirates of the Caribbean has come along to bump the great age of pirates and their treasure back up into the top layers of popular culture.

‘Pieces of Eight’ is one of many names for the large silver coins of the king of Spain, a multiple of the basic Spanish denomination, the silver real: so a piece of 8-reales, peso de ocho reales, or peso. It is also the original silver dollar, a name that starts out as a place in the Czech Republic in the sixteenth century and ends as the currency of the modern USA.

Pieces of eight pretty much ruled the monetary world from the 1570s till the French Revolution, the main vehicle for the transfer across the globe of silver from the great mines in Mexico and Bolivia in Spain’s American empire. It was a coin that would be familiar in every part of the inhabited world.

Throughout this period only infinitesimal quantities of pieces of eight ever fell into pirate hands. The Spanish operated a highly successful system of security and transport, the threats to which came from organised enemy fleets, not rag-tag pirate crews. Most of their silver sailed around the world paying for wars, encouraging trade, changing the fates of empires. You cannot write a history – especially an economic history - of the early modern world without engaging with pieces of eight. Pirates of the Caribbean merely nibbled on the insignificant fringes of this world.

In fact, our idea of pirates is probably even more distorted than our idea of pieces of eight. Piracy is an ancient and deadly trade, bringing ruin and suffering to millions across the millennia of human history. It is still rife today, as we know from horror stories on the news. Yet the word summons up the very specific world of the early eighteenth century Caribbean and the lives of individuals like Blackbeard and Henry Morgan, who were fictionalized practically while they still lived.

You can move from the early accounts of Blackbeard to fully fictional creations like Long John Silver, then to Captain Hook and Jack Sparrow and hardly ever touch much reality on the journey. Yet it does make for an exciting buccaneering voyage.