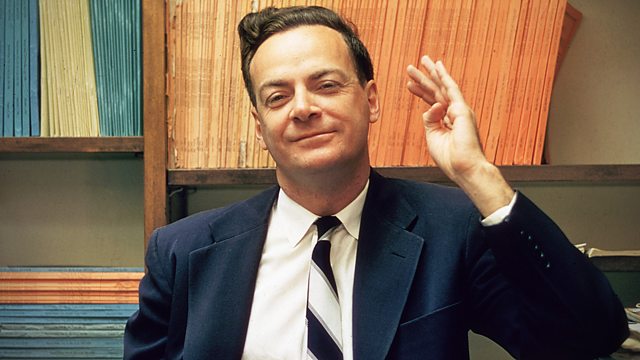 Brian Cox presents a tribute to the genius of Richard Feynman, regarded as the greatest physicist since Einstein and one of science's most inspirational characters.

Following on from his archive portrait of Carl Sagan, Physicist Brian Cox presents a tribute to Richard Feynman. Widely regarded as the finest physicist of his generation and the most influential since Einstein, Feynman did much to popularise science, through lectures, books and television, not least his dramatic revelation before the world's media at a press conference in which he demonstrated the exact cause of the Challenger Shuttle explosion in 1986.

Described as the 'Mozart of physics', Feynman's amazing life and career seemingly had no end of highlights. A student at MIT and then Princeton (where he obtained an unprecedented perfect score on the entrance exam for maths and physics), he was drafted onto the Manhattan Project as a junior scientist. There his energy and talents made a significant mark on two of the project's leaders, Robert Oppenheimer and Hans Bethe. The latter would become Feynman's lifelong mentor and friend. Bethe called his student "a magician", setting him apart from other scientists as no ordinary genius. In 1965, Feynman shared a Nobel for his unique contribution to the field of Quantum Electrodynamics making him the most celebrated, influential and best known American Physicist of his generation. Something that would continue until his death from cancer in 1988.

At the same time as his scientific reputation was building, Feynman's unconventional attitude and behaviour was helping to create his reputation for eccentricity. When bored of writing equations on chalk boards or lecturing in his lab, he would go off in search of inspiration down at the local strip club, watching the go-go girls and scribbling his calculations on napkins. He played bongos and cracked safes. He was multi-disciplined before the term was even invented, allowing his curiosity to stray into biology, psychology and computing. He was playful and imaginative because he saw the value in not being solely focused on applied research. His eccentricity would at times infuriate his colleagues but it was simply a natural consequence of how he thought. From a young age, as he explains in the programme, his father instilled in him an insatiable curiosity about the world, a desire to know at a fundamental level, how it operated. It simply wasn't enough to know the name of something. His father also taught him to carry a healthy disrespect for the natural hierarchy of things. Recounting a hilarious story about his Father's dislike of the Pope, Feynman saw status and honours as little more than ephemera: "epaulets and uniforms" and his father, a uniform salesman by trade, "knew the difference between a man with the uniform on and the uniform off - it's the same man".

Though few ever understood mathematics or physics like Feynman, he truly believed that science was simply too important to be left exclusively to scientists and his energy and humour was essential in getting the public interested and inspired to find out how the world works for themselves, something that is essential today as science plays an increasingly central role in world events and everyday life.

Open that Door: Gay Comedy in the Last 30 Years