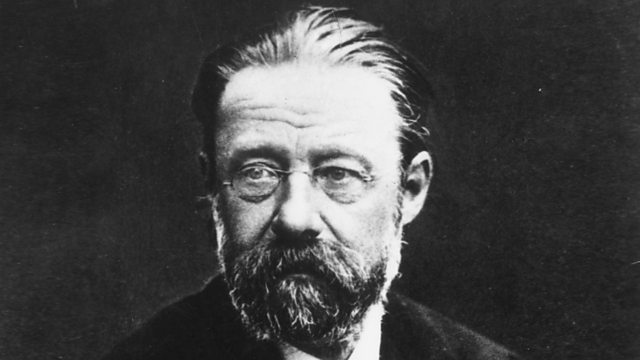 A series of six symphonic poems by Bedrich Smetana, Ma Vlast is at the core of Czech cultural identity. From September 2010.

Written in the late 19th century, it's a series of six symphonic poems. For a western audience the most popular and best loved is Vltava, a soundscape conjuring up vivid images of the river which runs through Prague.

Jan Kaplan is a Czech born film-maker who has lived in the UK since 1968. He describes the 'educational concerts' he had to attend as a young boy when - bored to tears - he would endure long performances of Smetana's music.

However, as an adult living in exile, his experience of Czech culture was tinged with a remote sense of patriotism and he grew to appreciate his national composer. When - following the 1989 Velvet revolution - he was eventually able to return home, he witnessed one of the most famous and moving performances of Ma Vlast at Smetana Hall in 1990.

Also at that concert was musicologist, Professor Jan Smaczny, who describes his memories of that evening, and explains the history and mythology portrayed in Ma Vlast.