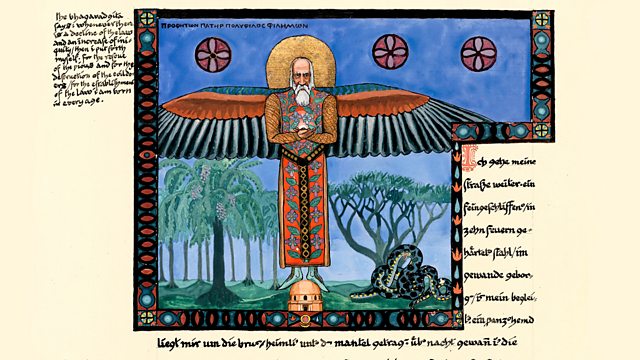 Bidisha explores Carl Jung's Red Book, recently made available to the public, in which he developed his theories and also created a beautiful work of art.

Bidisha looks at Carl Jung's remarkable Red Book, recently made available to the public for the first time, in which he developed his theories and also created a beautiful work of art.

The early part of the 20th Century was a time of great spiritual, intellectual and artistic upheaval in Western Europe. In Vienna, Arnold Schoenberg and his pupils Anton Webern and Alban Berg, whose music we will hear in the second half of tonight's Prom, were rewriting the rules of classical music. Sigmund Freud was practising psychoanalysis in Vienna, and Jung was developing his theories of analytical psychology; the two worked closely together for several years.

Europe was heading for the First World War and on the eve of the war Jung had an almost catastrophic spiritual crisis which led him to enter in to a long and complex period of self-analysis.

Jung recorded his psychological experiments on himself in a beautiful manuscript which he called Liber Novus (the New Book). Bound in red leather, it became known as the Red Book.

The Red Book contains fine calligraphy, with illuminated capital letters like a medieval manuscript. Jung also created several full-page paintings - some fairly naturalistic, others which appear to be abstract patterns. Jung used these images to help him analyse his own unconscious and to develop some of his most important theories in analytical psychology.

The Red Book remained hidden by Jung's family after he died, first in the family home then in a Swiss bank vault. It was not until late in 2009 that a facsimile of the Book was finally published and made available to the public.

Bidisha talks to Professor Sonu Shamdasani, Editor of the published edition of the Red Book, and to the artist Bettina Reiber about this extraordinary artefact.