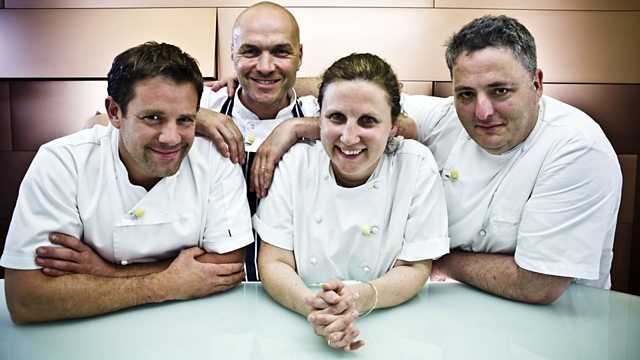 Programme following four of the nation's top chefs as they explore why Britain throws away huge quantities of perfectly edible food, culminating in a VIP waste food banquet.

Programme following four of the nation's top chefs - Angela Hartnett, Richard Corrigan, Matt Tebbutt and Simon Rimmer - as they journey deep into the heart of Britain's food waste problem, exploring how and why the nation throws away and reject huge quantities of perfectly edible food.

Cameras follow the chefs as they source shocking amounts of unwanted food from every link in the food chain - from supermarkets to ordinary homes, markets to farms - and then transform it into mouth-watering dishes.

The chefs face a unique and near-impossible task: can they create a fabulous banquet for over 60 VIPs using the food that the rest of us don't want? Can they create restaurant-standard food using ingredients that have been discarded, rejected or deemed unsuitable for sale? Will they be able to change the way Britons think about waste food?

The dishes the chefs create are judged by four of the nation's toughest food critics - Matthew Fort, Prue Leith, Oliver Peyton and Jay Rayner - who decide which dishes go onto the menu for the lavish banquet designed to prove that saving scraps is good.

As the chefs source their ingredients and the banquet unfolds, the solution to the scandalous food waste crisis reveals itself to be a simple one: just eat it.