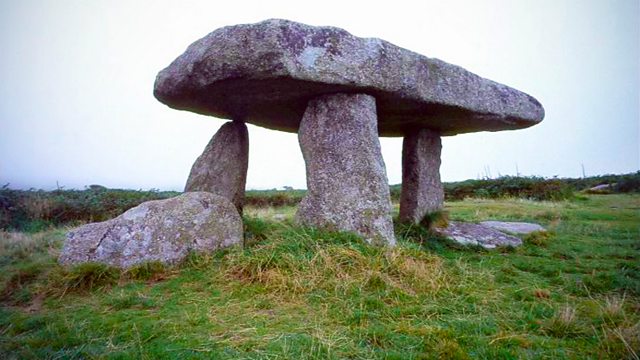 Helen Mark visits Cornwall to find out why the reintroduction of cattle to graze the Penwith Moors and improve the area's biodiversity has upset some of the local community.

Helen Mark is in Cornwall to find out why the reintroduction of cattle to graze the Penwith Moors of Cornwall and improve the area's bio-diversity has upset some of the local community. She meets up with archaeologist Craig Weatherhill at the Tregeseal Stone Circle to hear about the damage he says is being caused to these ancient monuments by the horns of the non-native Longhorn breed of cattle being grazed on the moors. Craig also tells Helen about the difficulties faced by horses and their riders from the newly erected gates and fences which they have to pass through.
At Carn Galva, one of Cornwall's most unique and pre-historic landscapes, Helen meets up with Peter Bowden from Natural England and Jon Brookes of the National Trust who explain the reasons for the conservation grazing scheme and how important it is to this ancient landscape. This heathland is of national and international importance and the grazing scheme is intended to open up footpaths the natural way, avoiding the need for heavy machinery and herbicides, and fences and cattle grids have been put there to keep cattle in and not people out. However, when Helen joins Ian Cooke and Steve Yandall of the Save Penwith Moors campaign, she hears about their concerns for the environment and how emotional they felt to have barbed wire fences appearing out on the moors. But when she arrives at Trengwainton Farm near Penzance, farmer Stephen Bone takes Helen to a part of his land that his father fenced and grazed 40 years ago and which soon became waist high in bracken when the cattle were taken in. Stephen is actually now busy re-fencing his land ready to graze animals there as part of the Conservation Grazing Scheme. He tells Helen that he has offered an olive branch to those opposed to the scheme by suggesting that he take his livestock in during the busy summer months and school holidays.
Finally, Helen meets up with Stephen Warman who has been brought in to try and resolve the situation and to narrow the gap between the two opposing sides. Where do they all go from here in order to manage the moors in the best way for all those who care about this landscape?.