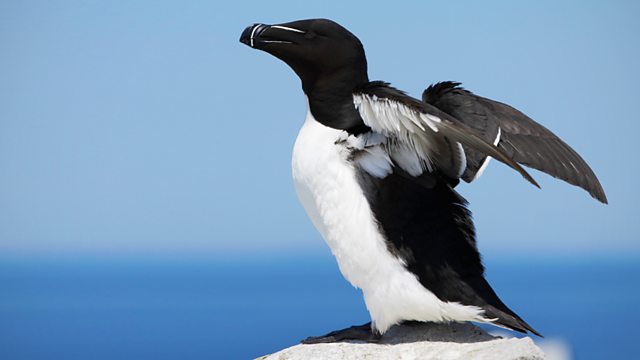 A Guide to Coastal Birds
Episode 4 of 5

Brett Westwood and wildlife sound recordist Chris Watson offer help with identifying birds which are likely to be seen and heard on sea cliffs around Britain's coastline.

4/5. Brett Westwood is joined by keen bird watcher Stephen Moss on the Devonshire coast. With the help of wildlife sound recordist Chris Watson they offer a practical and entertaining guide to birds which you're most likely to see and hear on sea cliffs around Britain's coastline; birds like Fulmar, Kittiwake, Guillemot and Razorbill.

This is the fourth of five programmes to help identify many of the birds found around our British coastline in places like sandy beaches, rocky shores, off-shore islands, estuaries and sea cliffs. Not only is there advice on how to recognise the birds from their appearance, but also how to identify them from their calls and songs.

This series complements three previous series; A Guide to Garden Birds, A Guide Woodland Birds and A Guide to Water Birds and is aimed at both the complete novice as well as those who are eager to learn more about our coastal visitors and residents.

See all episodes from A Guide to Coastal Birds