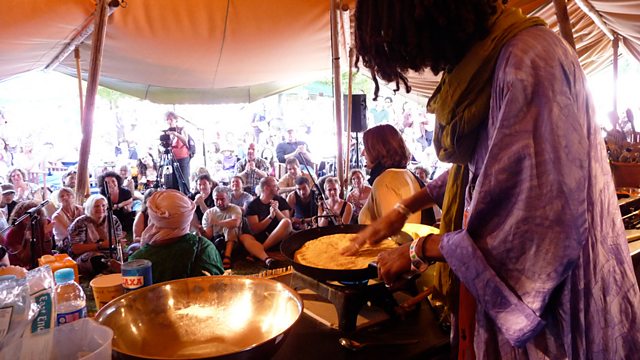 Shelia Dillon presents from the Taste the World stage at the WOMAD festival in Wiltshire. Musicians from Cote d'Ivoire, Egypt, Finland and Sicily, cook, play and chat.

Recorded at this summer's WOMAD festival, The Food Programme visits the TASTE THE WORLD STAGE. Musicians from Cote d'Ivoire, Egypt, Finland and Sicily, cook, play and chat while Sheila Dillon looks on in amazement and samples the food. WOMAD stands for World of Music, Arts and Dance and gives its name to the internationally established Festival, which brings together artists from all over the globe. In the last few years Music, Arts and Dance has come to include food - at the Taste of the World stage. It's organised by and was the idea of Annie Mentor who has been with WOMAD since it began 28 years ago.

Taste the World has been an increasingly popular feature of WOMAD festivals around the world since 2005, bringing artists performing at the festival to a designated 'cookery' stage to prepare and cook a traditional dish from their country of origin. The audience is encouraged to ask questions and open up the discussion of food and music, and at the end of the session everyone gets to taste the food. The sessions incorporate spontaneous musical interventions and artists will often break into song as they cook. These encounters are a fascinating and intimate opportunity to enter into the world of the artist.

In this week's Food Programme, Sheila Dillon interviews TTW founder Annie Menter, MC Roger de Wolf, TTW sponsor Guy Watson of Riverford Organics, and musicians from around the world. These interviews are intercut with music and chat from the TTW stage - making for an upbeat and uplifting Bank Holiday weekend edition of the programme.