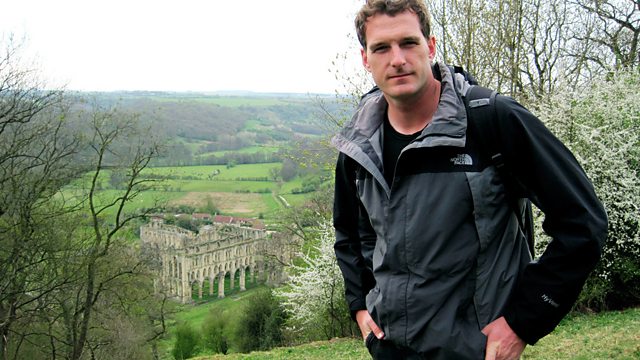 Dan Snow's walk takes him north to lands devastated by the Normans after the Invasion, but which became the setting for their abbeys and monasteries.

As part of the BBC's Norman season, historian Dan Snow puts his walking boots on and sets off to see what the great British landscape can teach us about our Norman predecessors. From their violent arrival on these shores, to their most sustaining legacies, Dan's three walks follow an evolutionary path through the Normans' era from invasion, to conquest, to successful rule and colonization.

On the Sussex coast, along the Welsh border and on the edge of the North York Moors, Dan explores the landscape and whatever evidence might remain - earthmounds, changing coastlines, viewpoints, and the giant stone castles and buildings that were the great symbol of Norman rule. All these elements offer clues as to how the Norman elite were ultimately able to dominate and rule our Anglo-Saxon kingdom.

Dan's final walk takes him north, to lands brutally devastated by the Normans four years after the Invasion. But the genocide of the Harrying of the North campaign was the final act that brought the whole of England under Norman control. The walk explores how the area became the setting for one of the Normans' greatest legacies – the abbeys and monasteries of northern England.

From Helmsley Castle to Rievaulx Abbey, Dan investigates how one local lord established an institution that would revolutionise the community and commerce of the moors. With numerous similar abbeys the ambitious Normans would create a new era that defined northern England throughout the Middle Ages.