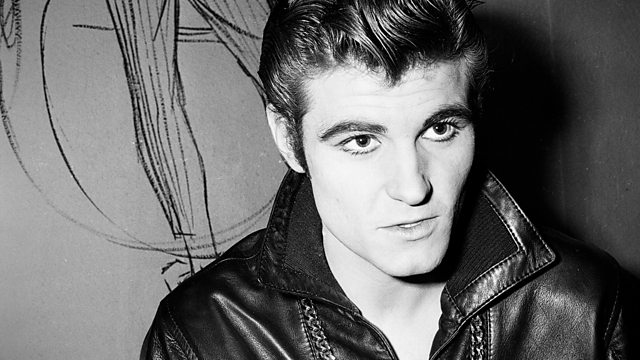 Ziggy Stardust was a rock and roll fantasy. But David Bowie's fictional rockstar, around whom his 1972 album, stage show, and film were built, was inspired by a real performer, Vince Taylor, born in Isleworth, Middlesex. This programme uncovers the truth about a singer whose wild lifestyle ultimately destroyed him, but in so doing he gave rise to a myth that transcended glam-rock and science fiction.

His record "Brand New Cadillac" remains to this day a British rock 'n' roll classic, covered later by The Clash.
But Vince was frustrated by his limited success in Britain and, already displaying the unpredictable behaviour and volcanic temper that were to dog him for the rest of his days, he moved to France where the "yé-yé" crowd really went wild for him. They called him 'Le Diable Noir' - the Black Devil.

Decked out in black leathers, chains, kohl eye make-up and with his hair greased up into a high pompadour he was immediately signed to the French Barclay label. But fuelled by alcohol and drugs Vince's behaviour became increasingly erratic. At a party he tried LSD for the first time. In his state of mind at the time it was absolutely the very last thing that he needed.

Vince Taylor underwent a kind of public breakdown at his next gig, where he started claiming he was a divine being. David Bowie bumped into him in London and later said: "Vince Taylor was the inspiration for Ziggy...He always stayed in my mind as an example of what can happen in rock n roll. I'm not sure if I held him up as an idol or as something not to become. There was something very tempting about him going completely off the edge."

The programme, presented by Martyn Day, tracks down many of the people who worked with Taylor, including members of his original band and his family.

"The greatest of all David Bowie’s characters was Ziggy Stardust, and if you’ve ever wondered where Bowie found inspiration for Ziggy and his demise, listen to this programme. Host Martyn Day examines the extraordinary career of Vince Taylor, a great mover with terrible voice, who recorded his 1959 hit Brand New Cadillac in just 10 minutes. Vince was so hot in France that there were riots at his gigs, but after he took acid at a party, things went horribly wrong…"