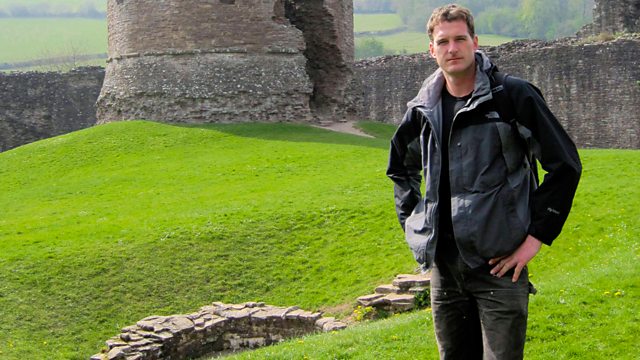 Dan Snow's walk around the Monnow river system is dominated by the motte and bailey castles that sprang up in the Norman era.

As part of the BBC's Norman season, historian Dan Snow puts his walking boots on and sets off to see what the great British landscape can teach us about our Norman predecessors. From their violent arrival on these shores, to their most sustaining legacies, Dan's three walks follow an evolutionary path through the Normans' era from invasion, to conquest, to successful rule and colonization.

On the Sussex coast, along the Welsh border and on the edge of the North York Moors, Dan explores the landscape and whatever evidence might remain; earthmounds, changing coastlines, viewpoints, and of course the giant stone castles and buildings that were the great symbol of Norman rule. All these elements offer clues as to how the Norman elite were ultimately able to dominate and rule our Anglo-Saxon kingdom.

Dan's second walk explores what the invaders did next, as they aimed to cement their rule across a diverse nation. Despite William the Conqueror being confirmed as king, the Normans had only completed stage one of their colonization, and few areas were as unstable as the Welsh borders. Challenging topography and a multitude of local chieftains made for an uncivilized region and Dan’s walk around the Monnow river system is dominated by the motte and bailey castles that sprang up throughout the Norman era. These were the handiwork of ambitious barons who made their mark on the 'march' – a border zone from which the Normans pushed their influence west into Wales and Ireland. Dan's very rural walk is still touched by the agriculture, forests and common ground established by the Normans, and he discovers that one of the present-day landowning families has held its lands for almost a thousand years.