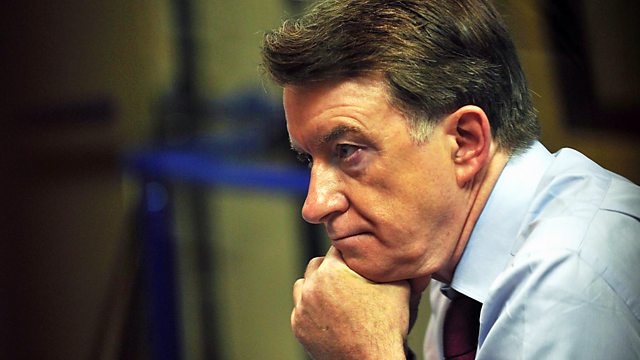 Meeting Myself Coming Back Series 2
Episode 1 of 2

Peter Mandelson, former Labour PR supremo, cabinet minister and peer, reflects on his life via the BBC Archives. From August 2010.

From Labour PR supremo to cabinet minister and peer, and dubbed "Prince of Darkness" along the way, Peter Mandelson reflects on his life in sound through the BBC archives. In the first programme of the series "Meeting Myself Coming Back" where guests replay the sound archive of their life, he talks to John Wilson about his career, hears recordings of his younger self and discusses how he has changed over the decades.

Lord Mandelson grew up with Labour in his blood - his grandfather was the Labour cabinet minister Herbert Morrison. After university and early jobs, he became first the party's Director of Campaigns and Communications and then MP for Hartlepool. After Labour's 1997 General Election victory, he served in Tony Blair's cabinet but was forced to resign twice - once over a home loan and the second over the Hinduja passport affair. After a move to Brussels as EU Trade Commissioner, a surprise request by the new Prime Minister Gordon Brown saw him given a cabinet post for an unprecedented third time, serving this time as a Peer in the House of Lords.

In this programme, John Wilson takes Lord Mandelson through the sound archive of his life from his earliest appearance in the 1970s up to the Labour's 2010 election defeat. We hear about his role as a moderniser of the Labour Party, his work in Government and his very public resignations.