Schedule
BBC Radio 4
McCarthy: There Were Reds Under the Bed
Main content 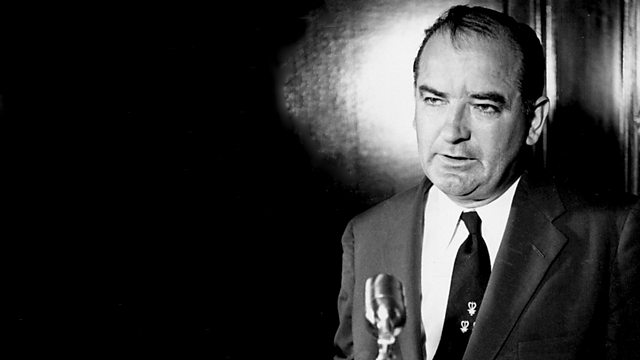 McCarthy: There Were Reds Under the Bed

David Aaronovitch reveals that McCarthy was right after all about the extent of Soviet infiltration into the highest reaches of the US government.

David Aaronovitch thinks the unthinkable about the McCarthy period.

The hunt for the so called 'Reds under the beds' during the Cold War is generally regarded as a deeply regrettable blot on U.S history. But the release of classified documents reveals that Joseph McCarthy was right after all about the extent of Soviet infiltration into the highest reaches of the U.S government.

Thanks to the public release of top secret FBI decryptions of Soviet communications, as well as the release under the fifty year rule of FBI records and Soviet archives, we now know that the Communist spying McCarthy fought against was extensive, reaching to the highest level of the State department and the White House.

We reveal that many of McCarthy's anticommunist investigations were in fact on target. His fears about the effect Soviet infiltration might be having on US foreign policy, particularly in the Far East were also well founded.

The decrypts also reveal that people such as Rosenberg, Alger Hiss and even Robert Oppenheimer were indeed working with the Soviets. We explore why much of this information, available for years to the FBI, was not made public. We also examine how its suppression prevented the prosecution of suspects.

Finally, we explore the extent to which Joseph McCarthy, with his unsavoury methods and smear tactics, could have done himself a disservice, resulting in his name being forever synonymous with paranoia and the ruthless suppression of free speech.

Hearing from former FBI, CIA and KGB operatives as well as formerly blacklisted writers, David Aaronovitch, himself from a family of communists tells the untold story of Soviet influence and espionage in the United States.