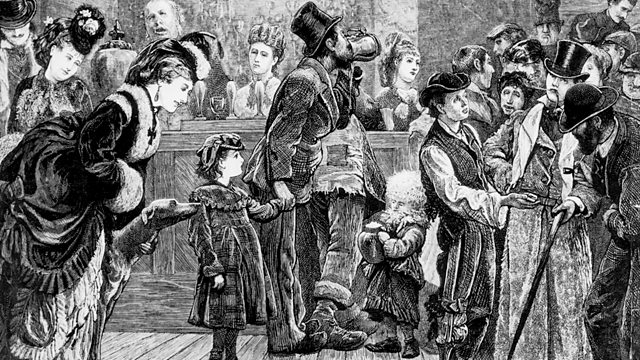 Habitual Drunkards and the Asylum

Britain on the Bottle: Alcohol and the State
Episode 6 of 10

Mark Whitaker examines the late 19th-century panic over habitual drunkards and the building of special asylums in which to rehabilitate them. From July 2010.

Mark Whitaker focuses on a new sort of panic that swept the nation at the very end of the 19th century - a panic about the number of 'habitual drunkards' in the country and the impact they were having.

This was the time of pioneering social research by the likes of Booth and Rowntree, and also of a new belief in the ability of government to intervene to change social conditions. Allied to this was a growing medical confidence that addiction to alcohol was a disease that could be isolated and treated - and a new term was invented, 'inebriety'.

Public and political opinion on the matter was hugely influenced by the publication by the Daily Telegraph in 1891 of a long series of letters giving first-hand accounts of alcohol addiction. They were revelatory, and the paper called them a "sad mirror of the National Sin". There was particular concern over the extent of female drunkenness, and this fed into fears about a deterioration of the 'national stock'.

A leading medical figure argued that "the wide-spread prevalence of alcoholism among women, especially during the reproductive period of life, is one of the important factors making for racial decay".

Such fears came to a head when many young men proved insufficiently healthy to fight in the Boer War. In 1898 Parliament passed an Inebriates Act that required local authorities to set up special 'reformatories' as an alternative to prison for those arrested time after time for being drunk and disorderly. Courts could sentence people to them for up to three years. The shift was from condemnation to cure: but the reformatories couldn't survive after the outbreak if war in 1914.

Political Thinkers and the Drink Question