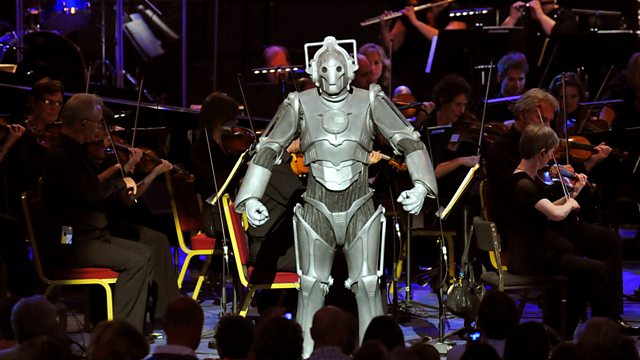 Doctor Who (Matt Smith) and Amy Pond (Karen Gillan) join the BBC National Orchestra of Wales for music by Murray Gold from the drama series plus favourites with a celestial theme.

The Doctor is back. Two years ago he appeared at the Proms via video link, this year he's here in person. Doctor Who (Matt Smith) comes to the Royal Albert Hall with his assistant Amy Pond (Karen Gillan) for an action-packed evening alongside the BBC National Orchestra of Wales and the London Philharmonic Choir. Monsters from the current run of the massively successful BBC series threaten to disrupt proceedings, and only the Doctor - ably assisted by conductors Ben Foster and Grant Llewellyn - can save the day.

They're joined by Grant Llewellyn, a regular partner with the orchestra, for some classical favourites with a suitably celestial theme, including Mars from Holst's Planets Suite and John Adams's thrilling Short Ride in a Fast Machine (possibly even a time machine!).

The score for each TV programme is written by Murray Gold and recorded by the BBC National Orchestra of Wales in their Cardiff studio, conducted by Ben Foster.

Thrills, spills, adventures, monsters and special guests are all guaranteed along the way in this Proms spectacular. Petroc Trelawny has the unenviable task of keeping everything in order for Radio 3 - though sadly without the help of a sonic screwdriver.

Murray Gold: Music from Doctor Who - The Madman with a Box (Prologue); An Untimely Arrival; I am The Doctor; Battle in the Skies
Adams: Short Ride in a Fast Machine
Walton: Portsmouth Point Overture
Holst: Mars (from The Planets)