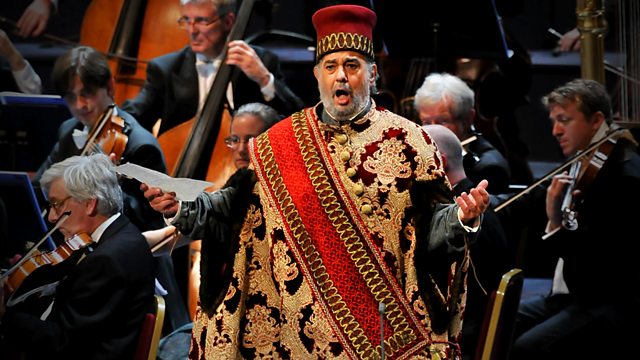 From the Royal Albert Hall, the conclusion of Verdi's opera Simon Boccanegra, with Placido Domingo in the title role. Antonio Pappano conducts. Acts 2 and 3.

Classic Verdi themes are at the heart of his opera Simon Boccanegra: the clash of love and power, and an intense relationship between Boccanegra and his long-lost daughter Amelia. The Spanish tenor Placido Domingo has sung over 130 different operatic roles, which must be something of a record. But he had never sung a baritone role until a year ago, when he took on a part he had long wanted to play: Simon Boccanegra, the Doge of Genoa. 'Verdi didn't have any children,' says Domingo, 'and in any opera when you have the parts of father and daughter, he wrote his best music'.

This Proms semi-staging is based on the Royal Opera House production by Elijah Moshinsky, with a starry cast conducted by the Music Director at Covent Garden, Antonio Pappano.

This Prom will be repeated on Tuesday 20 July at 2pm.