BBC Two
How to Build... a Nuclear Submarine
Main content 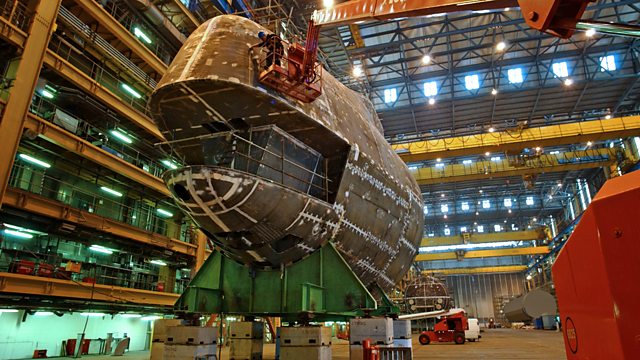 How to Build... a Nuclear Submarine

Documentary following the construction of the Astute nuclear submarine, which has been fourteen years in the making and cost over a billion pounds.

Fourteen years in the making and costing over a billion pounds, the Astute nuclear submarine is one of the most technologically advanced machines in the world, and for over a year the BBC filmed its construction inside one of the most secure and secret places in the country.

An amazing piece of British engineering or a controversial waste of tax payers' money? This documentary allows viewers to make up their own minds.

Among many of the workers, the film features Erin Browne, a 19-year-old apprentice electrician who wires up the boat; Commander Paul Knight, responsible for the safety of the nuclear reactor; and Derek Parker, whose job involves moving massive pieces of the submarine that weigh hundreds of tons into position before the welding team join them together.

Amazing computer graphics take us inside the construction of the submarine itself, giving a blueprint of the design, the life support systems and the weaponry, and help illustrate the areas that national security precluded filming in.

The story also takes a dramatic turn when an unforeseen event means the submarine has to sail into the open sea - for the first time - during one of the wettest and windiest weekends of the year.

See all clips from How to Build... a Nuclear Submarine (9)