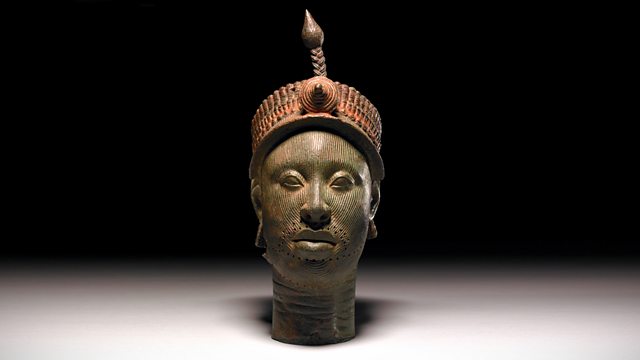 The history of the world as told through objects arrives in 15th Century West Africa. Neil MacGregor tells the story of a magnificent brass head from Ife, a city now in Nigeria.

The history of humanity as told through one hundred objects from the British Museum is back in Africa. This week Neil MacGregor is exploring high status objects from across the world around 700 years ago.

Today he has chosen a sculpture widely considered as one of the highest achievements of world art. It comes from Ife, a city now in South-Western Nigeria. It's a slightly less than life sized representation of a human head, made in brass at a time when metal casting had become a hugely sophisticated art. The head, with its deeply naturalistic features, was probably that of a great king or leader although its exact function remains uncertain. The head leads Neil to consider the political, economic and spiritual life of the Yoruba city state that produced it. The writer Ben Okri responds to the mood of the sculpture while the art historian Babatunde Lawal considers what role it might have played in traditional tribal life.

This head probably depicts an Ooni, a ruler of the West African kingdom of Ife that flourished between AD 1100 and 1500. The portrait-like realism of Ife heads is unique in African art. This naturalism astonished art historians when the first Ife heads were brought to Europe in 1911. One German explorer even proposed they were made by Greek settlers in Africa - the origins of Plato's Atlantis myth. Eighteen heads have been found in total, and their stylistic similarities suggest that they were made by an individual artist or in a single workshop.

The kingdom of Ife first emerged around AD 800. It was one of several competing West African kingdoms that developed during the medieval period. Ife's power and wealth was probably partly derived from its access to the lucrative Niger River trade routes, connecting it to the wider trade networks of West Africa and the Sahara. Today Ife is regarded as the spiritual heartland of the Yoruba people of southwest Nigeria. Ife is celebrated as the place of origin of mankind, where the gods descended from heaven to populate the world.

The Kingdom of Ife

This crowned head of a ruler is a remarkable piece of brass-casting which reflects important aspects of the landmark culture developed in Ife, on the lower Niger River, dating back around 2,000 years and blossoming in the twelfth-fifteenth centuries.

The time known in Europe as the medieval period was the golden age of West Africa. Powerful empires controlling vast territories flourished in the West African savannah, with a huge impact on the history and cultures of the whole subcontinent: the Ghana Empire (800s-1100s), the Mali Empire (1200s-late 1300s), and the Songhay Empire (1400s-late 1500s). To the East, in the Central African savannah, the Kanem-Bornu Empire expanded around Lake Chad.

Trade routes criss-crossed West Africa, linking the northern savannah cities such as Gao, Timbuktu, Djenne, and the southern forest centres such as Begho, Igbo-Ukwu, Ife and Oyo, to the Hausa states such as Kano and Zaria, and reaching Ngazargamo in Kanem-Bornu. That regional trade was in turn connected to the considerable trade across the Sahara desert to the north. These trans-Saharan exchanges linking Northern (together with Andalusia in Spain) and North-eastern Africa to trading cities in West Africa and on Lake Chad.

West Africa was also a major supplier of gold to Europe. Big states and regional powers competed to control the trade which brought enormous wealth and power to them. This trade was a powerful channel for crafts, skills, new ideas and consumer goods, as well as for the spread of Islam. Major cities flourished as places of international trade attracting merchants, artisans, Muslim scholars and clerics from various horizons.

In this context Ife grew to become a flourishing cosmopolitan city-state, a commercial and trading centre regarded today as the legendary homeland of the Yoruba-speaking peoples. It established significant political and religious authority in the lower Niger region, in what is now modern Nigeria. Its rulers promoted crafts, particularly copper-alloy casting, weaving, and bead-making. Its legacy includes outstanding naturalistic works of art in stone, terracotta and metal.

The metal and abundance of beads represented in this beautiful work tell us about the vital connection of Ife to the regional trade network. These are signs of wealth and the highest authority, for brass and beads were power and luxury materials accessible only to entitled and wealthy dignitaries. From all that it can be concluded that the head was used to perform important and sophisticated ritual ceremonies most likely centred on a sacred ruler.