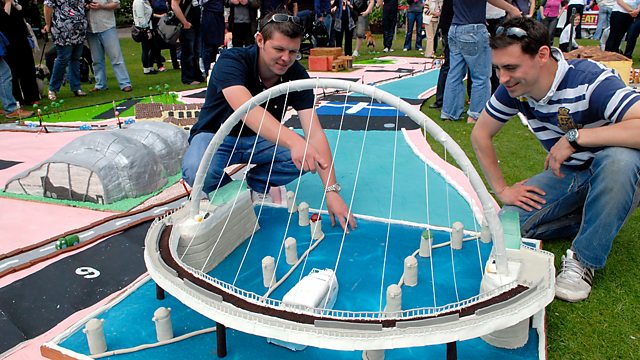 A mad hatter's tea party, a flash mob picnic, a sausage-making party and some DIY molecular gastronomy are some of the events Sheila Dillon samples at community food festival EAT!

Sheila Dillon returns to EAT! Now in its fourth year, it's an ambitious community food festival - creating, sharing and celebrating some of the best food - in Newcastle and Gateshead.

At Cafe 21 Sheila meets chef Terry Laybourne to talk about the festival's ethos and its impact on the North East.

With the festival's director, Simon Preston, she attends an 'artisan house party' for a DIY evening of molecular gastronomy presided over by Noel Jackson from the Life Science Centre. Sukey Firth visits a sausage-making party where Steve Pearce from Stewart & Co shows guests how to make the best bangers.

The children of Bede Primary School have been making food and decorations for a Mad Hatter's Tea Party. Ray Foster, headteacher and mad hatter explains the benefits for pupils and parents.

Sheila talks to cake bakers Nick Hall and Iona Owen who have been preparing for a huge celebration of food and architecture, in which hundreds of the cities' iconic buildings and structures are being made, out of cake. Clare Armstrong, head pastry chef at Cafe 21 created an online social networking group, Cakebook, to encourage participants to exchange advice and baking tips. Sheila chats to Jane Walsh who recreated the Great North Museum, in cake.

Mark Holdstock reports from the Cakebook flash mob picnic, where the cakes were displayed. The Emerson Chambers cake from Nick and Iona was joint winner with the Trinity aka 'Get Carter' Car Park.