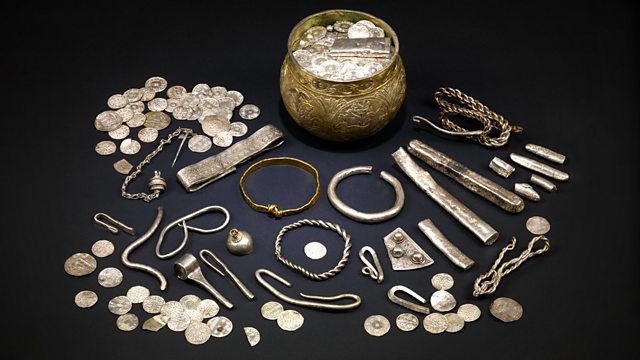 Neil MacGregor explores a great Viking silver hoard discovered in North Yorkshire, which dates back to the 10th century and reveals the astonishing range of Viking activity.

The history of the world as told through objects that history has left behind. This week Neil MacGregor, the director of the British Museum, has chosen objects that bring life to the traders, pilgrims and raiders who swept across the vast expanse of Europe and Asia between the 9th and 13th centuries.
Today he is with a great Viking treasure hoard that was discovered by metal detectors in a field in North Yorkshire. This dramatic, recent discovery, consisting of over 600 coins buried in a silver cup, dates back to the 10th century and reveals the astonishing range of Viking activity. There are coins here minted as far away as Afghanistan and Iraq! Neil describes what the England of the early 900's was really like. He unravels the cliches that abound about the Vikings. The historian Michael Wood helps set the scene and the father and son team who found the hoard, David and Andrew Whelan, recall the excitement of the discovery.

This Viking hoard was discovered in 2007 in North Yorkshire. It was buried in AD 927 and contains 617 silver coins, which were tightly packed into a Frankish silver cup, along with silver bars, and both intact and broken jewellery. This treasure was probably accumulated through a combination of raiding and trading throughout Europe and beyond. Some of the jewellery is Scandinavian, some Russian and some of the coins are from Central Asia. The Vikings originally came from Scandinavia but settled in Scotland, Ireland, Normandy and northern and eastern England.

Why was the hoard buried?

Around AD 920 Britain was divided into a southern Anglo-Saxon kingdom and the Viking kingdom of Northumbria, with its capital in York. The hoard probably belonged to a member of York's powerful Viking elite. The dates of the later coins show that the hoard was buried after the Anglo Saxon king, Athelstan, conquered Northumbria in AD 927. Uniting the two kingdoms, Athelstan was the first king who could claim to rule over the whole of what would become England.

Finding the treasure within

When we first saw the Vale of York cup it just looked grey and featureless on the outside and was filled to the brim with soil. There was obviously something more interesting inside however, as we could see coins and some ingots and Viking hack-silver at the top.

The first thing we do with things like this is to X-ray them. The radiograph of the cup showed us it was crammed with coins and other objects, but there was so much in there that we still weren’t sure exactly how many there would be or what other things we might find. So it was an exciting process carrying out a ‘mini excavation’ of the cup.

The initial work with any Treasure hoard is to quantify and identify the number of items present and in this case the conservator who excavated the cup worked her way down in layers, recording and planning the objects found. She worked closely with a coin expert who identified the coins as they came out, seemingly in a never-ending flow.
It was amazing how many things had been packed in there. There were around 600 coins as well as the other items bringing the total to 67 objects and 617 coins in the hoard.

Each object and coin had to be individually cleaned both manually using a microscope as an aid and with chemicals. Among the trickiest objects to clean were jewellery items formed of twisted wire where corrosion had really choked the chains. We don’t use polishes because we always aim to preserve the original surface, but most of the coins had been so protected in the cup that they were incredibly bright and polished anyway, as if they had been made yesterday.

Some of our early discoveries related to manufacture and decoration. We discovered that the cup was gilded both on the outside and the inside and that it was decorated with niello, a black material inlaid into some of the engraved lines. Only the outside and the top of the gilded rim have been cleaned so that you can see evidence of the impression of coins in the corrosion left on the inside.

During the conservation work we also found small ‘nicks’ on many of objects and coins where the Viking owners had tested the metal for silver quality. On the bright shiny surface of some of the coins we also found what might be the traces of corroded Viking fingerprints.

This is what makes it so exciting for a conservator, to be the first to find the evidence that connects us so closely with the people who made and used these things.

It was January 6, I think around lunchtime by the time we got to the field. It was a typical dreary January day in a muddy rough ploughed field. It was a field that we normally don’t go in because we’ve never found anything good in there, we tend to find dozens of Victorian buttons, but it was either that or go home.

We set off with our machines, I think Andrew had been three times and found nothing. This time we were there about 10 minutes and that’s when I got my signal – the big one!! I started finding lead at first. I dug down a bit more and got more lead and more lead and then, all of a sudden, this round thing fell into the hole from out of the side, so I’d actually just missed it. I thought “oh dear I’ve found an old ballcock – I’ve got a lead cistern with an old ballcock”. So I picked this round thing up and put it on the ploughed land, put my glasses on and looked at it and I could see all these animals on the cup and all these bits of silver on the top.

I crouched down in the soil and you could see the edge of a few coins sticking out of the top of it – there was a coin of Edward the Elder on top, and a small piece of silver chain as well that turned out to have a decorated bead on the end with a pin and then we saw a couple of small silver ingots. We put it in a sandwich box, wrapped it up and took it all home.It was just fantastic, unbelievable, things you dream of but never expect to happen.