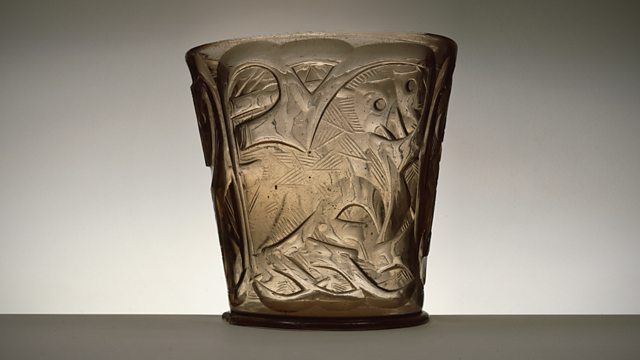 Neil MacGregor's world history as told through objects. Today's object is a glass beaker that some believed helped a Christian saint turn water into wine.

Neil MacGregor's world history as told through objects at the British Museum. This week he is looking at how objects moved around the medieval world in the context of war, trade and faith and the quite incredible degree of contact between Asia, Europe and Africa that existed around a thousand years ago. Today's object is a large glass beaker made at a time when Christians were warring with Muslims in the great crusades - a time, curiously enough, connected with a great flourishing of trade. This object was most likely made by Islamic glass workers but became associated with the miracles of a Christian saint, Hedwig. This glass container, or one of the few just like it, was what Hedwig famously used to turn water into wine! Neil describes the story of the Hedwig beaker with help from the economic historian David Abulafia and the historian of the Crusades Jonathan Riley-Smith. He also sees what happens when he pours water into this beautifully decorated vessel.

This beaker is decorated with Christian symbols, including a lion, a griffin, an eagle and a tree. Yet scientific analysis and the deep-cut style of the glass suggest it was made by a Muslim craftsman in Syria during the Crusades. Fourteen Hedwig beakers have been found, all in Europe, indicating that these objects were made specifically for a Christian market. Hedwig beakers take their name from Saint Hedwig (about AD 1174 ? 1243), who supposedly drank water from a similar glass, which miraculously turned to wine when it touched her lips.

How did Islamic glass reach Christian Europe during the Crusades?

In 1095 Pope Urban II called on all Christians to recapture Jerusalem and the surrounding Holy Land from Islamic control. In return, the pope promised Crusaders forgiveness for past sins. Nine Crusades were launched over the next 200 years, with increasingly diminishing degrees of success. Despite the Crusades, trade between the Christian and the Islamic countries flourished. Islamic glassware was particularly in demand and the Italian ports of Venice and Genoa grew rich as a result of trade with the Islamic world.

Part of an enormous trade

By Jonathan Riley-Smith, University of Cambridge

The crusades are obviously extremely important in terms of military history or religious history. But from the point of view of the beaker, the importance is this: the crusaders captured the coastline of Palestine and Syria which had on it some very important ports. At that time – at the time the crusaders took the coastline – these ports were not as significant as Alexandria in Egypt which was the main terminus of the Asiatic spice route, but, around 1170 the Asiatic spice routes changed, and Acre on the Palestinian coast – which is now in Israel – became the most important commercial port in the Eastern Mediterranean, and the chief terminus of the Asiatic spice trade, which meant that shipping from the west was coming out – bringing out European cloth – and bringing back to the west spices.

And Acre was an enormous revenue generator. Even after Saladin’s conquests of the hinterland and Palestine and Syria, the kingdom of Jerusalem or what remained of it for another hundred years, was regarded in the west as enormously rich above all because of Acre. That one port – according to an English contemporary - actually provided for the crown of Jerusalem more than the total revenues of the kingdom of England.

Now the export of the beakers to the west must be seen in that context. We know that material from Egypt – goods from Egypt – in transit passed through Acre either going east to Damascus and perhaps further east still; or to the west. And we have an absolutely fascinating list of commodities traded in the port of Acre in the middle of the thirteenth century, with the customs duty that was due on each commodity, and that mentions Muslim pottery.

It doesn’t actually mention these glass beakers, but it mentions Muslim pottery as one of the main items that would have been taxed. So the appearance of survival of beakers of this sort in Europe has to be seen in the context of the enormous trade between the west and the Levant – and further east, to furthest Asia – that was passing through a crusader port.