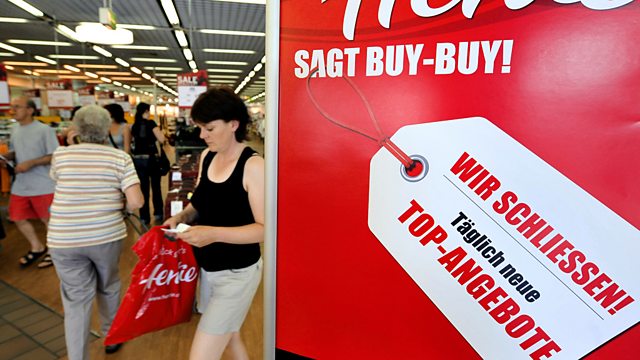 Thomas Franke explores his home town of Berlin, meeting those who embrace - and those who push back against - the rising tide of English words in today's German.

When Deutsche Bahn, the German railway operator, announced in February that no longer would their stations have "Kiss and Ride Zones" or offer a "Call-a-Bike" service, it became a minor international news item. Because, for generations now, contemporary German has become littered with forms of English words. And they're not just those ubiquitous neologisms such as "Handy" for mobile phone and "Beamer" for projector. Says Thomas "in daily German you find a "dating agentur", where "singles" are looking for partners, um ein "Date" zu haben. If they are successful they maybe have a "candlelightdinner" and later they hopefully practise "safer sex". In the morning they go to the "Back shop" around the corner to buy bread." And, he adds, when he recently called someone at the topically Germanising Deutsche Bahn, his secretary regretted that he was "in einem Meeting". So much for new German brooms.

The Garden of Time

The Diaries of Sofia Tolstoy