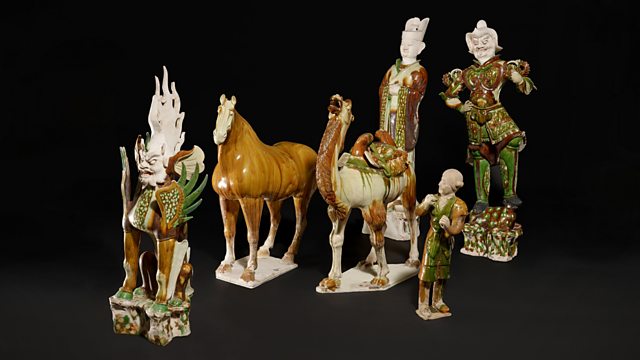 Neil MacGregor describes how the Tang emperors of China left their mark, as he examines a collection of tomb figures.

This week Neil MacGregor is exploring life in the great royal courts across the world during Europe's medieval period, from the heart of Europe to Mexico and Sri Lanka. Today he is in China of the Tang Dynasty around 700 AD. He tells how the elite of the time chose to leave their mark on the world by writing or commissioning their own obituaries. He is with a curious troupe of ceramic figures that were found in the tomb of a Tang general along with a stone tablet proclaiming his achievements. The China scholar Oliver Moore explains the growing ambitions of the dynasty and journalist Anthony Howard describes the enduring power of the obituary.

These 12 figures were buried in the tomb of the Tang general Liu Tingxun. He died in AD 728 at the advanced age of 72. The figurines are among the tallest known to have survived from this era. Then Chinese people believed that you needed to furnish your tomb with all the things which were essential to your status in life. The human and animal figures were created to serve and protect Liu Tingxun in the afterlife. The supernatural guardian figures warded off evil spirits.

Who were the Tang?

The Tang dynasty (AD 618-906) represents a golden age of achievement in Chinese history. Under Tang rule, China became the richest and most powerful political unit in the world. China's success lay in its control of the oasis towns along the Silk Route, sending silk westwards and receiving luxury goods and animals such as horses. Camels were used as beasts of burden because of their ability to travel long distances on small rations of water.

What did the Tang do for us?

The Tang dynasty (618-906 AD) was regarded by the Chinese as one of their great golden ages, when the empire was the richest and most powerful in the world. Its list of rulers includes 20 emperors and one empress – the only woman in Chinese imperial history to reign in her own right. Empress Wu first ruled through her husband, emperor Gaozong, from 660-683 and usurped the throne in 684.

This period was generally characterized by cultural brilliance, territorial expansion and great prosperity. The Tang capital at Chang'an, present day Xi’an, marked the eastern end of the silk route and was a wealthy city with a flourishing trade in exotic foods, textiles, furs and fine horses via the oasis towns of the Taklamakan Desert. There were Buddhists, Muslims, Jews, Zoroastrians, and Nestorian Christians, all living and working in the capital during one of the most exotic and cosmopolitan periods of Chinese history.

The eclectic motifs and technical virtuosity of Tang craftsmen can be seen in the splendid gold and silver vessels and jewellery found buried in local tombs, hoards and crypts of this period.

Tang rule was extended further than at any time in Chinese history until the Qing dynasty, 1644-1911, the last imperial dynasty, and the Chinese of the Tang period exerted huge influence over all the countries within their immediate vicinity, particularly Korea and Japan. The Japanese sent a series of embassies to China during the seventh century and eighth centuries and Kyoto, the Japanese ancient capital was modelled on Chang’an.

Buddhism has been the main foreign influence to have a lasting effect on China. No other foreign influence took root there in the same way and by 600 AD probably 90% of Chinese practised the Buddhist faith (though not necessarily exclusively). It was during this period that Chinese pilgrims, such as Xuanzang, travelled to India and brought back the Buddhist sacred texts for translation. However the wealth of the monasteries sparked a counter-movement and in AD 845 anti-Buddhist persecution reached its height. As such, the persecution was directed not only towards Buddhism but also towards all other foreign religions and Buddhism never fully recovered. Only the native Chinese ideologies of Confucianism and Daoism survived the upheaval in one piece.
Tang poetry is held by many scholars to be the finest flowering of that art, and there are many famous painters from the period. It was also under the Tang that printing was invented in China, an invention that has had as much impact on the world as the internet today.

By Oliver Moore, lecturer in the art and material culture of China at Leiden University

Administration was a bureaucratic operation. It combined very old aristocratic families with what we could call new men. They were divided into various ministries – public works, the economy, there was a military board, and then the largest of all was ritual, with something like 30-50%. They would organise recurrent annual or monthly rituals, celebrations of the emperor’s birthday or princes and princesses birthdays, royal births, seasonal observances.

There was a very small group, whose significance grew throughout the dynasty, who took examinations and competed for state degrees. They tested people in poetry, in essay writing, in the literary lyrical genres, because the most successful officials would be people who would write the words of the emperor. Later on this system becomes magnified, so that by the year 1000 you have something like 15,000 men coming to the capital to take exams of whom only around 1500 would get a degree. So this is a system in which the largest number, well over 90%, will fail – repeatedly for the whole of their lives, and at the same time this is a system which fosters loyalty to the dynasty – which is quite remarkable really.