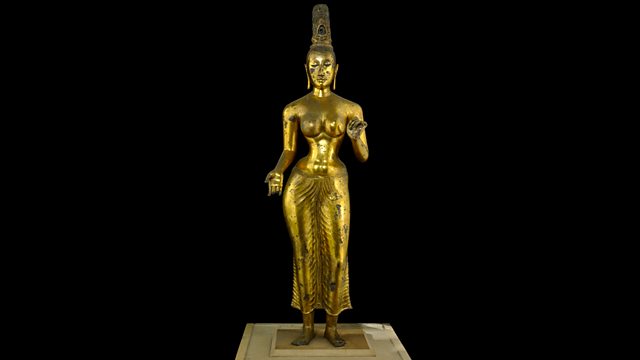 Neil MacGregor looks at a beguiling statue of the Buddhist deity Tara and explores was happening in South Asia during Europe's medieval period.

The history of the world as told through one hundred of the objects. The objects are selected from the collection of the British Museum by its director, Neil MacGregor.

This week, Neil is exploring life in the great royal courts across the world during Europe's medieval period. It's easy to forget that the civilisations of Tang China, the Islamic Empire and the Maya in Mesoamerica were all at their peak during this time and today we discover what was happening in South Asia during this period. He tells the story through a beautiful statue of the female Buddhist deity, Tara, crafted for a powerful ruler in Sri Lanka 1,200 years ago. Richard Gombrich explains what Tara means to Buddhism and the historian Nira Wickramasinghe describes the powerful interaction between Hinduism and Buddhism, India and Sri Lanka at this time.

This statue of the Buddhist goddess Tara combines the spiritual and the sensual. The sculpture would have been used as a focus for meditation on the qualities Tara represents ? mercy and compassion. Originally the sculpture would have been placed in a temple alongside a statue of her male companion, the bodhisattva, Avalokiteshevara. Bodhisattvas are beings who have reached enlightenment but have turned back from it, out of compassion so that they can still help mankind escape from the cycle of death, rebirth and suffering.

Who commisioned this statue?

When this sculpture was made, Sri Lanka had been predominantly Buddhist for about 1,000 years. It was then a hub for Indian Ocean trade and the sculpture may have been made by one of the Sri Lankan kings. Tara appears as a goddess in both Hinduism and Buddhism, as both religions share a common Indian cultural background. The earliest Buddhist deities were conceived as male and Mahayana Buddhism may have incorporated female deities, like Tara, to attract more female worshipers.

The epitome of beauty

This image of the Buddhist goddess, Tara, is unusual for being standing and almost life-size. If you look at her for long enough she may reach out and touch you.

Tara is the consort of a Bodhisattva – a Buddhist deity who, having achieved enlightenment, chose to relinquish it to help alleviate the suffering of humanity. Tara’s right hand thus reaches forward in a gesture of giving. She is both regal and human. Her narrow waist, rounded hips, full breasts, lips and large almond-shaped eyes all represent the Indian epitome of feminine beauty.

Within Hinduism, Buddhism and Jainism, the division between the sacred and the profane was always a fluid one. Thus the divine, or aspects of it, could be found in all spheres of life. Indeed, there was no part of life in which the divine was not present.
Tara is a goddess of the Mahayana Buddhism. However, Theravada Buddhism is practised in Sri Lanka today, so this image of Tara offers incontrovertible evidence for the presence of Mahayana Buddhism in the island of Sri Lanka.

The unusual circumstances in which Tara was discovered suggest that she was also emblematic for reflecting a practice common in medieval India: the appropriation of images as loot. She was unearthed from a field where she was probably hidden (and forgotten) for the better part of 600 years. This could possibly have been to protect her from the arrival of Islam in Southern India and Sri Lanka in the thirteenth century, or even earlier to protect her from invaders from the Hindu Kingdoms of Southern India.

Human agency is always involved in the transportation of objects and in medieval India the plundering of objects for the validation of victory in war was one of the primary objectives of conflict. Indeed, it was a conspicuously moral action.