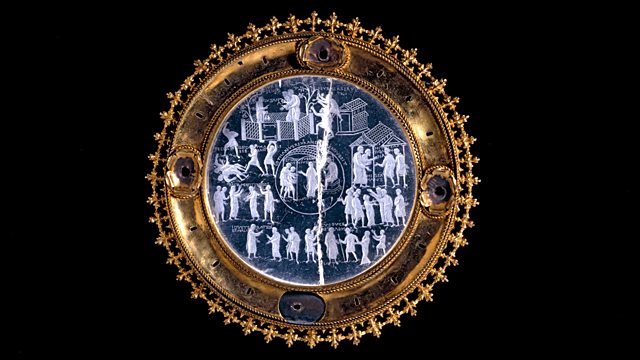 Director of the British Museum Neil MacGregor examines a rock crystal which offers a tale of intrigue from a great royal court during the European medieval period.

This week, Neil MacGregor is exploring life in the great royal courts around the world during Europe's medieval period. It's easy to forget that the civilisations of Tang China, the Islamic Empire and the Maya in Mesoamerica were all at their peak during this time. He is describing the life of these courts through individual objects in the British Museum's collection. In the last programme he was with the Abbasid court North of Baghdad and an exotic wall painting; today's object is an engraved rock crystal connecting a biblical tale to a real life story of royal intrigue at the heart of Europe.

The Lothair Crystal was made in the mid-ninth century and offers scenes in miniature from the biblical story of Susanna, the wife of a rich merchant who is falsely accused of adultery. The crystal was intended to exemplify the proper functioning of justice but, intriguingly, the king for whom the piece was made was himself trying to have his marriage annulled so he could marry his mistress! The historian Rosamond McKitterick explains what we know of the court of King Lothair and former senior law lord, Lord Bingham, describes the role of justice as portrayed in this exquisite work of art.

This crystal was made for Lothair II, king of the Franks. It depicts the biblical story of Susanna and the elders, in which Susanna is accused of adultery before being proved innocent by the Prophet Daniel. The subject matter may reflect Lothair's own marital problems. He attempted to divorce his wife, accusing her of incest. After the pope refused the divorce, Lothair forgave his wife and this crystal may have been made to reflect his acceptance of his wife's innocence.

Why did Lothair really want a divorce?

Lothair's great grandfather Charlemagne created the largest state in Europe since the Roman Empire. Charlemagne's sons divided this empire into France, Germany and Lothair's middle kingdom ? Lorraine. Lothair was desperate for a divorce because his wife could not provide him with an heir. This failure to produce a son led to Lothair's kingdom being divided between his uncles. If he had produced an heir Lorraine might now rank with France and Germany, as one of the great states of Europe.

Lothair and his kingdom

Lothair II (855-869), was the son of the Carolingian Emperor Lothair I and king of Lotharingia, an artificial kingdom which lay between Saxony and France with its capital at Aachen in modern Germany.

The Carolingians were the second ruling dynasty of the Franksand their name derives from that of Charlemagne, the great king (reigned 768-814) who established an empire in Western Europe reaching from northern Spain and France to northern Germany, Austria and northern Italy.

In 800 Charlemagne was crowned Emperor by the Pope at Rome. Under the tutelage of men of learning such as Alcuin of York and Paul the Deacon, he also initiated a great renaissance of art, architecture and learning, drawing on both the Antique culture of the Mediterranean world and Christian scholarship for inspiration. Aachen became the capital of the empire, where Charlemagne had a grand palace built.

The Carolingian rulers subdivided the realm between their heirs, which frequently led to civil war in a bid for power. Also, local officials and aristocrats took advantage of such events to assert semi-independent local rule in some regions.

To avoid dying without an heir, which would have meant his kingdom would be divided between its neighbours, Lothair II attempted to divorce his barren wife Theutberga and marry his mistress Waldrada, who had given him a son. Pope Nicholas intervened, compelling him to take back Theutberga or face attack from his uncles, who wished to share his kingdom between them.

On Lothair’s death, the inevitable happened: Charles the Bald and Louis the German seized his lands by the Partition of Mersen (870). In 888 the realm was partitioned into the kingdoms of France, Germany, Italy, Provence and Burgundy, and the Carolingian empire finally came to an end in 987, but the name of his kingdom survives even today in that of the rather smaller region of Lorraine in eastern France.