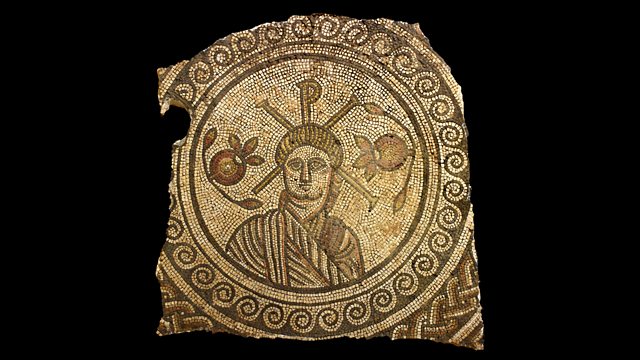 Neil MacGregor explores how many of the great religions began using images, such as an image of Christ made around the year 350 and found on the floor of a Roman villa in Dorset.

This week Neil MacGregor is exploring how many of the great religions, less than 2000 years ago, began creating sophisticated new images to aid prayer and focus devotion. Many of the artistic conventions created then are still with us. In today's programme Neil MacGregor introduces us to one of the earliest known images of the face of Christ. This life sized face is part of a much bigger mosaic. It was made somewhere around the year 350 and was found not in a church but on the floor of a Roman villa in Dorset. What does this astonishing survival say about the state of Christianity at this time and what sort of Christ was imagined in Roman Britain? The historians Dame Averil Cameron and Eamon Duffy help paint the picture.

This mosaic is probably one of the oldest surviving depictions of Christ. It comes from a Roman villa in Dorset. Christ is portrayed as a fair-haired and clean-shaven man wearing a tunic and cloak. Behind his head are the letters chi (X) and rho (P), the first two letters of the Greek word for Christ - Christos. Christ's head is a part of a larger mosaic, also containing pagan elements. These include the Greek hero Bellerophon riding Pegasus and slaying the monstrous Chimera.

When did the Roman Empire become Christian?

In AD 312 the Emperor Constantine converted to Christianity and the religion began to spread freely throughout the Roman Empire. Britain was at that point a far-flung province of the empire that would be abandoned 100 years later. This mosaic may have come from a villa's dining room or house-church owned by one of Britain's long-established Roman aristocratic families. Combining Christian and pagan imagery was common in this period and Bellerophon slaying the monster may represent Christ's triumph over death and evil.

What inspired the mosaic?

The Hinton St Mary mosaic can provoke debates about Christian iconography and Christianity in Britain, but it also asks us to consider what inspired its designer in Dorset. I have argued before that the villa owner or mosaicist was inspired by a coin of the emperor Magnentius (AD 350-3) which was struck in large numbers at Amiens, Trier, Lyon and Arles in France in AD 352-3. It is the first overtly Christian coin ever to be struck in the Roman Empire.

If one looks at the reverse of the coin, one sees a prominent Christian symbol, the chi-rho, between an alpha and omega (‘I am the Alpha and the Omega, the beginning and the end’ – Revelation 21.6). The obverse shows the bare-headed bust of the emperor with a distinctive chin and swept back hair.
Comparison with the head of Christ on the mosaic immediately shows that there are similarities. I believe that the head of Magnentius has been turned to face us on the mosaic, the hairstyle and prominent chin of the emperor being preserved on the mosaic. Furthermore, the Chi-Rho has been placed behind the head of Christ, in a way mirroring its appearance on the reverse of the coin. The artist has changed the image slightly, giving Christ a tunica and pallium instead of an imperial cloak and military cuirass. Furthermore, the alpha and omega are replaced by pomegranates, figurative images of eternal life commonly used in the ancient world.

Can we imagine that the patron of the mosaic asked a local mosaicist for an image of Christ on his floor? Is it possible that the mosaicist looked back in bemusement, stating that he did not know how to represent Christ? Was it then that a coin of Magnentius was produced to act as a model for the head of Christ? This is all speculation, but it is interesting to note that such a coin was found pierced, for use as a pendant, in a Roman cemetery just outside of Dorchester – for at least one local it was certainly an important Christian symbol.

By Eamon Duffy, Professor of the History of Christianity, University of Cambridge

Remember we know very little about the social context of these images. There are Christian images popping up all over Roman Britain in the fourth century. There are very similar images at Lullington in Kent, at Frampton in Devon. You find the Chi Ro symbol and Bellerophon in both those places, so it seems that there is an accepted symbolic language which people might have known. They clearly knew what the Chi Ro symbol meant. Constantine had given that currency literally: it appeared on his coins. But whether people – or everyone who saw the Bellerophon fighting the chimera – realised that this was some sort of symbol for Christ’s victory over the powers of darkness, or whether they simply absorbed it as decoration, would be hard to say. I mean on the Hinton St Mary pavement we really don’t know what the four figures around Christ mean – are they the four winds, are they the four seasons, are they the four evangelists?

This is a period of cultural flux when half-converted people who have adopted Christianity may still be practicing pagan magic, they may still have some of these pagan notions knocking around in their heads, they may well be hedging their bets - and that’s true at every period when Christianity encounters a pagan culture. It’s absorbed into the culture but there is no instantaneous transition from the old religion to the new. There’s a period in which people are just living in two worlds – even Constantine after his conversion had inscriptions to the sun god Sol Invictus on his coins - sometimes alongside the Chi Ro.

So it enables us actually to see the point at which Christianity begins to colonise a great pagan culture, and of course in the process is partly colonised itself by that culture.

The Hinton St Mary mosaic is absolutely fundamental; it’s very well known. It’s a youthful Christ without a beard; he seems to be wearing Roman clothing and I think this is an experiment. It’s an experiment in how to depict Christ in familiar iconographic form.

The problem with the mosaic is that we can’t date it very precisely. But let’s suppose its fourth century AD – that was after the emperor Constantine, and the emperor Constantine seems to have converted himself to Christianity, and started to favour the Christians. It’s impossible to underestimate that connection. Whatever Constantine himself believed, he set Christianity on a completely different track, and by the end of the fourth century it was the official religion of the Roman Empire, and that continued for both East and West until right through the Middle Ages.

We don’t know that the impact was immediate in Britain, but what we have from Britain – Roman Britain in 4 AD after Constantine - are a number of archaeological finds including this mosaic and some silverware from Water Newton in Cambridgeshire, and also another mosaic from Kent, in Lullingstone, with Christian signs on them. So we know that members of the elite – probably Romans – were converting to Christianity and they were members of the bureaucracy; the people who were out there ruling the provinces. And they were decorating their villas, their elaborate villas, with Christian signs and symbols. What we don’t know much about is the general population. We have these elite objects but who knows what the general population was thinking at this time?