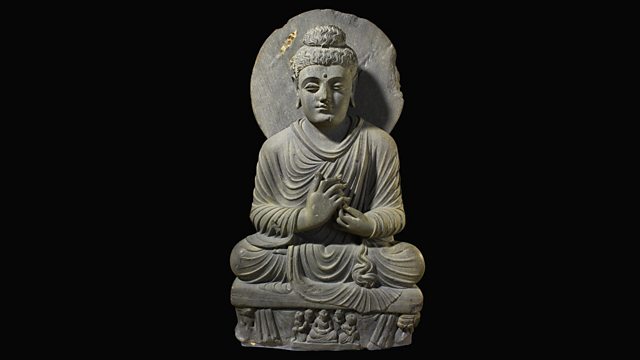 Neil MacGregor tells the story of one of the world's best known images, the Buddha.

This week the history of the world as told through one hundred objects is looking at how the world's great religions began trying to find the perfect way to visually express the divine, less than 2000 years ago.

Today, Neil MacGregor looks at how a stone sculpture from modern day Pakistan can tell us about how Buddhism set about creating the classic image to represent the real life Buddha who lived and roamed around North India in the 5th Century BC. It was not until over five hundred years later when the classic seated image of the Buddha was first formulated. Before then the Buddha was represented only by symbols. How did the Buddha image come about and why do we need such images? The Dalai Lama's official translator, Thupten Jinpa, and the historian Claudine Bautze-Picron help explain.

This is one the first images of the Buddha ever created. It shows him in an enlightened state, wearing monk's robes and seated in the lotus position. The position of his hands indicates that he is revealing the dharma, the 'way' of his teaching. This statue would have sat in front of a stupa - a domed structure that enclosed the Buddha's ashes. Pilgrims used statues like this to contemplate the Buddha's teachings before they visited his relics.

When were the first images of the Buddha created?

Images of the Buddha were not created until over 500 years after his death. The Buddha was an Indian prince who lived around 400 BC. He became a Buddha - an 'Enlightened One' - through comprehending the roots of human suffering while living an ascetic life. Buddhism spread from India along the Silk Road and by sea, but it was not until AD 0 - 100 that the first images of the Buddha were created. Before that the Buddha was represented by symbols such as his footprints.

This particular form of Buddha is very significant because it symbolises the Buddha’s awakening. So the left palm resting on his lap symbolises the Buddha in a meditative state, in which he is experiencing the awakening state, while the right palm in the gesture of touching the ground symbolises the calling up of the earth to bear witness to this event which is the principal source of inspiration for all the Buddhists. In actual fact you can look at the whole history of Buddhist thought as an attempt to try to understand and articulate the content of this one event – which is the Buddha’s enlightened awakening under the Bodhi tree.