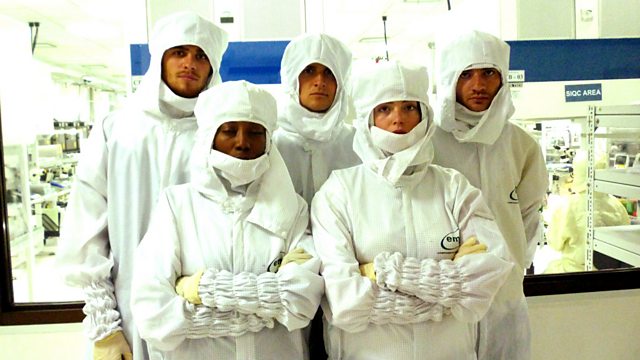 Blood, Sweat and Luxuries
Episode 5 of 5

Young British consumers work alongside luxury goods makers in Africa and Asia. In the Philippines they join electronics workers for whom productivity is everything.

Six young British consumers swap their luxury lives for the simple mud huts and shanty towns of Africa and Asia to work alongside the people who mine, manufacture, process and recycle luxury goods.

On the final leg of their journey the Brits leave Africa for the Philippines to discover where components for our mp3 players, DVDs and computers come from.

They join the workers in the ultra-competitive world of electronics, where productivity is everything and factories produce hundreds of thousands of components a day. It's a multi-billion pound industry and with so much at stake five mistakes in a million is too many.

When the Brits join the highly disciplined workers on the sterile factory floor, their lack of focus becomes a major issue and Oscar quits.

After five long weeks the Brits are due to return home, but not before they learn the level of sacrifice the workers make to support their families and are able to reunite a young woman with her two-year-old son. They also learn that the alternatives to factory life aren't quite what they seem as they meet the families who live and work on the city dumpsites.

As they head back to the UK leaving the slums and mud huts behind them, will their luxury lives at home ever be the same again?

See all episodes from Blood, Sweat and Luxuries