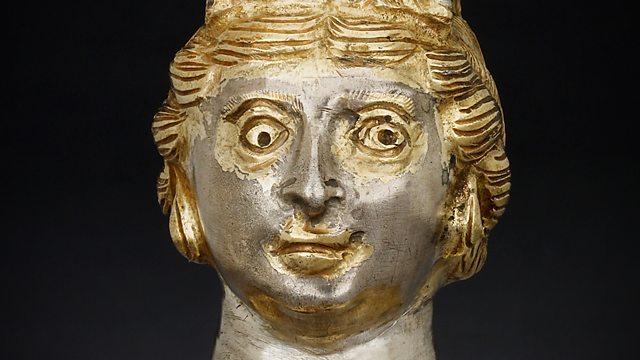 The history of the world told through objects. Today, the Roman spice trade with India, as told through a silver pepper pot that was found as part of a buried hoard.

Neil MacGregor's world history told through objects at the British Museum arrives in Britain at the time of the Roman collapse. Throughout this week he has been looking at how different cultures around the globe were pursuing pleasure, roughly 2000 years ago, from smoking in North America to team sports in Central America.

Today, Neil looks at how the elite of Roman Britain sustained their appetite for luxury goods and good living in the years before their demise. He tells the story through a silver pepper pot that was discovered as part of a buried hoard - hidden possibly by Romans on the run. He describes the ambitions of the elite in Roman Britain and how they satisfied their particular taste for pepper, with contributions from the food writer Christine McFadden and historian Roberta Tomber.

The holes in the bottom of this model of a Roman noble woman indicate that she was used as a pepper pot. She is part of the Hoxne hoard, the largest Roman treasure ever discovered in Britain. As well as three other pepper pots, the hoard contains around 15,234 coins and 200 gold objects. Only a very wealthy family could have owned such treasures. We do not know the identity of the person who buried it but several objects are inscribed with the name Aurelius Ursicinus.

How did pepper come to Britain?

Pepper did not grow in Britain or any other part of the Roman Empire. It was grown in India and to get to Suffolk, the pepper was first shipped to Egypt and then transported by sea, river and over land. Pepper was just one expensive luxury traded across the Indian Ocean in ancient times. Other items to reach the Roman World included gems, cloth and spices such as cloves, cinnamon and ginger. Along these trading routes also travelled monks, priests and diplomats linking Europe with India and China.

Who was the Hoxne empress?

The silver pepper- or spice-container from the Hoxne treasure in the form of a female half-figure was originally named ‘the Empress’ because of its marked resemblance to a series of ancient bronze weights cast in the form of female busts that had been widely regarded as portraits of Byzantine empresses. However, research in recent years on both the bronze weights and on the Hoxne statuette has moved away from this interpretation.

She wears a voluminous T-shaped tunic with wide sleeves, a style that was popular in the late fourth and fifth centuries. The tunic is decorated with embroidered or woven patterns at the cuffs and on two vertical bands that pass over the shoulders and down the front and back of the garment. The gilded decoration around her wrists probably represents the close-fitting sleeves of her under-tunic. Her jewellery is as sumptuous as her dress: around her neck is depicted a necklace of very large gemstones set in gold. Above it is another decorated feature, perhaps a second gold necklace or simply the neckline of the under-tunic. The figure holds a scroll, probably to symbolise her learning and authority.

The most striking aspect of the lady’s appearance is her intricate hairstyle, one that was often represented in late-Roman art. It would have required very long, thick hair and the attentions of a skilled hairdresser to create. Thick sections of hair at each side were dressed to create a frame of full waves around the face, while the back hair was divided into a series of tresses which were twisted in alternating directions: two thin braids were crossed and brought round the head behind the side-waves, while the main fall of tresses was swept up over the back of the head in a broad swathe, folded under at the top of the head, and anchored in place with decorative hairpins. The latter were probably made of precious metal, and seen from the front create an effect like a diadem or tiara. The lady’s ears are hidden, but she wears two very large almond-shaped earrings or hair ornaments, probably gemstones set in gold.

If the Hoxne figure is not a portrait of a late-Roman empress, who is she? She is not a goddess, for pagan deities generally wear or carry distinctive attributes that tell us their identity. Nor is there anything to indicate that she is an early Christian saint or martyr. She may simply portray a wealthy and aristocratic late-Roman woman, just the kind of person who would have owned and used the jewellery and tableware in the hoard.

When the Romans came to Britain they brought a lot of material culture and a lot of habits with them that made the people of Britain feel Roman; they identified with the Roman culture. Wine was one of these – olive oil was another – and pepper would have been a more valuable one in this same sort of ‘set’ of Romanitas.

It’s very difficult for us to quantify the scale and the value of this trade; the actual value was enormous. One hint we have of this is from a second century papyrus known as the Muziris papyrus, which is a loan agreement between an Alexandrian merchant and someone in India. And in that they discuss the cost of a shipload from south India in the second century. And it is estimated today at seven million sestertius. But, just to put that in context, at that same time a soldier in the Roman army would have earned about 800 sestertia a year.

In the West we love its flavour, and I think that maybe has to do because in this day and age when we have access to all kinds of cuisines and all kinds of ingredients we have jaded palettes. So we’re always seeking something new and stimulating and exciting. Which is just what the Romans did: they were very similar ‘foodies’ in their time.

Pepper contains an alkaloid called piperine which is responsible for the pungency, and this substance piperine is similar but milder to chillies, which contain something called capsaicin, which produces the same sensations of warmth. And what it does to the body is it promotes sweating, which cools the body, which is essential for comfort in hot climates. If you’ve ever been to India you may notice that the drinks have peppercorns in and they often serve snacks that have a lot of pepper in. It’s just to cool you down; and it works really well. It also aids digestion: it titivates the taste buds and makes the mouth water. When the body experiences pain of piperine, say, or capsaicin, it excretes something called endorphins which result in a natural feeling of wellbeing - a natural high if you like - so you could argue that this spicy flavour is also mildly addictive.

It’s a vital export for pepper growing countries, and it’s a vital ingredient in food processing. Sausages and soups and pickles and sauces, crisps, chocolate and ice cream wouldn’t taste the same without it. And it’s even used in the perfume industry and in sweets.