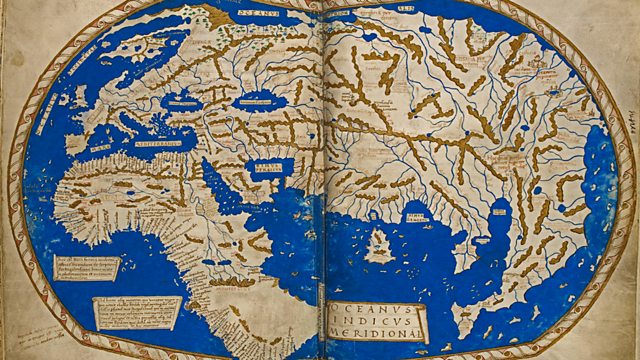 Spirit of the Age

Jerry Brotton shows how maps can reveal the fears and prejudices of their age, from medieval religious passion to Victorian obsession with poverty and disease.

In a series about the extraordinary stories behind maps, Professor Jerry Brotton shows how maps can reveal the fears, obsessions and prejudices of their age.

Religious passion inspires beautiful medieval maps of the world, showing the way to heaven, the pilgrims' route to Jerusalem and monstrous children who eat their parents. But by the Victorian era society is obsessed with race, poverty and disease. Royal cartographer James Wyld's world map awards each country a mark from one to five, depending on how 'civilised' he deems each nation to be. And a map made to help Jewish immigrants in the East End inadvertently fuels anti-semitism.

'Map wars' break out in the 1970s when left-wing journalist Arno Peters claims that the world map shown in most atlases was a lie that short-changed the developing world. In Zurich, Brotton talks to Google Earth about the cutting edge of cartography and at Worldmapper he sees how social problems such as infant mortality and HIV are strikingly portrayed on computer-generated maps that bend the world out of shape and reflect the spirit of our age.

Windows on the World

See all episodes from Maps: Power, Plunder and Possession