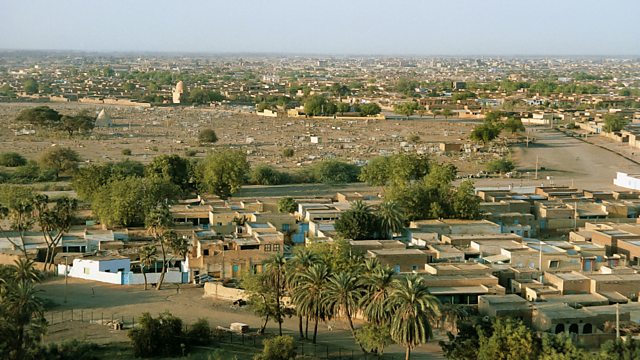 Theatre at the Front Line

Zeinab Badawi visits the Albuga Festival in Khartoum to meet actors and directors who are at theatre's front line and use their skills to help communities recover from war.

Zeinab Badawi reports from Khartoum on the efforts of the artistic community to help bring piece to a country which had suffered violent internal conflict. Theatre, dance and song all played their part in preparing the country for a future which would be decided by the 2010 referendum, a referendum which would lead to the creation of two separate countries.

She visits the Albuga Festival in Khartoum to find out how writers, actors and directors use their skills to help communities recover from war - people like Ali Mahdi, director of the National Theatre in Khartoum and an active member of the International Theatre Institute, who has established a Centre for Theatre in Conflict Zones. Much of its work is based on the approach of Augusto Boal, who pioneered theatre within damaged communities. The actors and the audience join forces to play out their experiences, reaching some kind of resolution from which they can rebuild.

Zeinab Badawi also experiences the passionate singing and ululating of the Hakamas, a group of women from southwest Sudan, who, during the civil war, used to sing their menfolk to war. Now they have brought their powerful voices to the cause of peace. Zeinab visits one of the refugee camps to hear them perform.

These and other groups are all committed to reconciliation and community rebuilding, but Sudan is often on a political knife-edge, and Zeinab asks whether theatre and performance can really make a lasting difference.