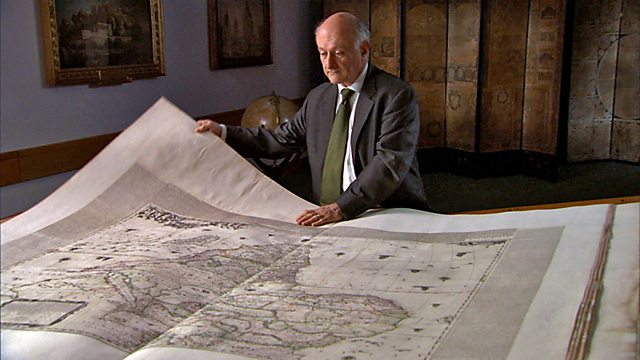 The Beauty of Maps
Episode 1 of 4

The Hereford Mappa Mundi is the largest intact Medieval wall map in the world and its ambition is breathtaking - to picture all of human knowledge in a single image. The work of a team of artists, the world it portrays is overflowing with life, featuring Classical and Biblical history, contemporary buildings and events, animals and plants from across the globe, and the infamous 'monstrous races' which were believed to inhabit the remotest corners of the Earth.

The Mappa Mundi, meaning 'cloth of the world', has spent most of its long life at Hereford Cathedral, rarely emerging from behind its glass case. The programme represents a rare opportunity to get close to the map and explore its detail, giving a unique insight into the Medieval mind. This is also the first programme to show the map in its original glory, revealing the results of a remarkable year-long project by the Folio Society to restore it using the latest digital technology.

The map has a chequered history. Since its glory days in the 1300s it has languished forgotten in storerooms, been dismissed as a curious 'monstrosity', and controversially almost sold. Only in the last 20 years have scholars and artists realised its true depth and meaning, with the map exerting an extraordinary power over those who come into contact with it. The programme meets some of these individuals, from scholars and map lovers to Turner Prize-winning artist Grayson Perry, whose own work, the Map of Nowhere, is inspired by the Mappa Mundi.

City Maps - Order out of Chaos

See all episodes from The Beauty of Maps

See all clips from Medieval Maps - Mapping the Medieval Mind (2)