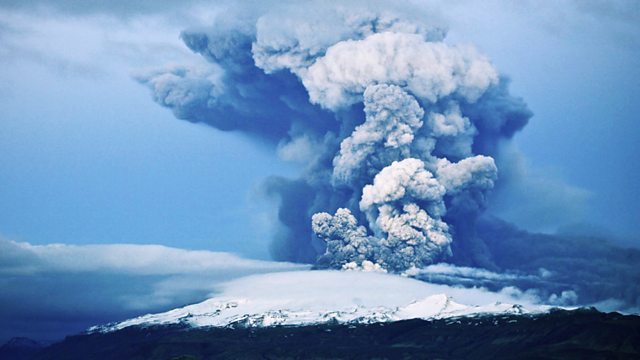 Volcanoes have provoked enormous environmental changes since the birth of the planet. Tom Heap investigates the effects of the latest Icelandic eruption.

'Costing the Earth' looks at the environmental effects of the recent Icelandic eruption. Could volcanoes hold the key to climate change or simply dwarf man's attempt to control his impact on the environment?

The ash cloud from Eyjafallajokull has grounded European and transatlantic flights but before environmentalists cheer at the carbon saved they need to examine the longer term effects on climate.

The volcano erupted beside the 5th biggest glacier in Iceland and could have caused huge glacial melt. Scientists are warning 'increased rumblings from below' mean that Iceland's volcanoes may be about to enter a more active phase. If so it could be a timely reminder that whatever Copenhagen-style summits decide or don't, the environment is not solely in the hands of even the most powerful global leaders.

Looking back in history the 1783 eruption in Iceland killed over half the local livestock, caused crop failure and starvation throughout Europe and even weakened the monsoon season in India. The Geological Society investigated the threat of a much larger 'super volcano' in 2005 and found that it could threaten the fabric of civilisation.

But it's not all gloom. Scientists in Canada and the United States have been arguing that as natural sulphate particles lowered the temperature by 0.5 degrees in 1991 after the Pinatubo eruption in the Philippines volcanoes could hold the key to halting climate change. They want to investigate the possibilities of controlled stimulation, but could small eruptions like the Icelandic one hold at least some of the answers they might need?

The Great Flood of Paris