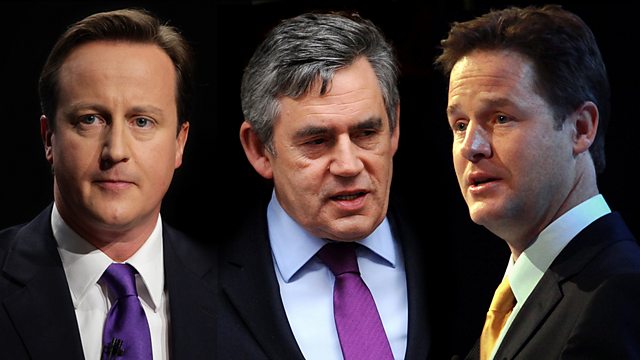 The World Tonight The Prime Ministerial Debates
Episode 1 of 3

For the first time in a British general election, the leaders of the three largest UK parties take part in TV debates. The topic of this, the first debate, is domestic affairs.

For the first time in a British general election the leaders of the three largest UK parties are taking part in televised debates. Radio 4 will broadcast the whole of tonight's first debate, on domestic affairs, hosted by ITV live from 8.30.

Robin Lustig will be in London with a panel of political watchers to look ahead to the issues being discussed, and afterwards from 10.00 to consider how the leaders tackled them.

Ritula Shah will be in Worcester with floating voters, who will be giving their reaction to the debate. We'll also ask if leadership debates can change history.