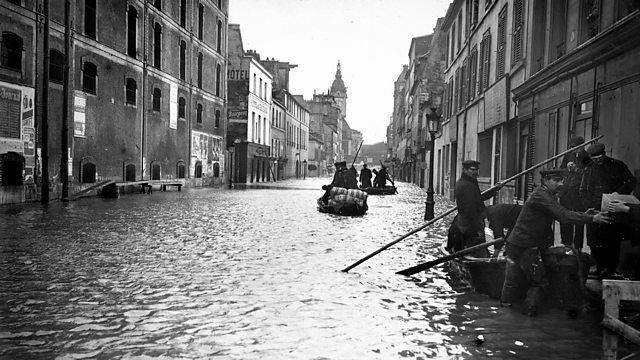 The Great Flood of Paris

Paris in 1910 was at the centre of the world's cultural and intellectual life. New metro tunnels and new sewers were making life cleaner and faster for two and a half million Parisians. There was such confidence in the efficiency and modernity of the city that early reports of floodwater tumbling down the River Seine were largely ignored. Nature, surely, had nothing with which to threaten the greatest city in the world?

In 'Costing the Earth' Tom Heap chronicles the causes and effects of Europe's greatest ever urban flood. Assisted by the new tunnels, the waters of a wet winter rose beneath the city making hundreds of thousands homeless, bringing Parisian life to a complete halt for many weeks. To many residents it seemed as if the city was doomed. Surely the huge class divisions, seen so recently in the Paris Commune, exacerbated by food shortages would lead to riots and ultimately revolution.

Tom tells the story of the extraordinary unity that somehow prevailed and the great engineering efforts to drain and re-build the city. He joins modern Parisians to hear how the lessons have been learned and acted upon. Could a 'once in a century' flood threaten the city again? Could London learn from the pain of Paris? What can we all learn from the stoicism and heroism demonstrated by Parisians rich and poor in the face of disaster?