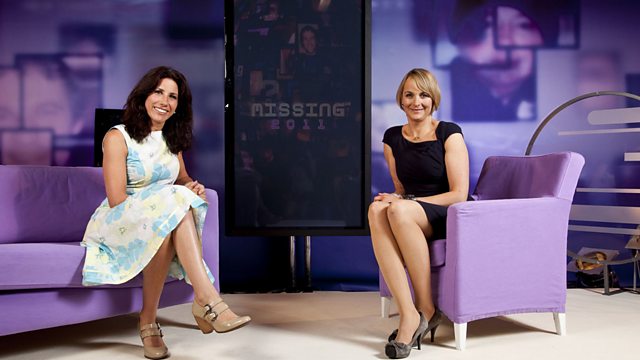 Louise Minchin and Rav Wilding meet the search and rescue experts that helped find a 70-year-old Alzheimer's sufferer, and the family of a missing 19-year-old ask viewers for help.

Missing Live asks viewers for their help to find some of the UK's disappeared. Working with police forces and the UK charity Missing People, the series reveals how they try to discover the whereabouts of the thousands of people who go missing every year.

In the studio, presenter Louise Minchin talks to family, friends and experts, exploring the heartbreaking stories of people currently missing. While, new for this series, Rav Wilding meets those who have been safely found, telling their incredible stories.

Also this series, actress Pauline Quirke joins the Police Missing Persons Unit in Hackney - the area where she grew up - to experience firsthand their remarkable work to reunite the families of missing people.

On this programme: 70-year-old John Burchell, who has Alzheimer's, disappeared after he took his dog out for a walk. He was out over night in freezing temperatures and we meet the search and rescue experts that helped find him.

The family of 19-year-old Richard Lambert ask viewers for their help to find him. He, together with his limited edition car, both disappeared after an argument on a night out with his girlfriend last year.

See all episodes from Missing