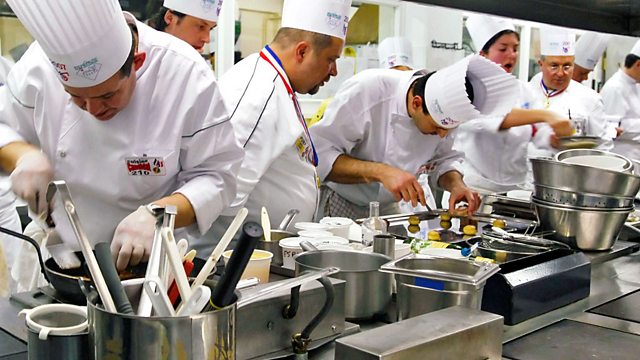 Documentary chronicling the Meilleurs Ouvriers de France competition, in which 16 French pastry chefs battle in hope of being declared one of the best by the country's President.

Imagine a scene never before witnessed - 16 French pastry chefs gathered in Lyon for three intense days of mixing, piping and sculpting everything from delicate chocolates to six-foot sugar sculptures in hope of being declared one of the best by the country's President.

This is the prestigious Meilleurs Ouvriers de France competition (Best Craftsmen in France). The blue, white and red striped collar worn on the jackets of the winners is more than the ultimate recognition for every pastry chef - it is a dream and an obsession. The finalists, France's culinary elite, risk their reputations as well as sacrifice family and finances in pursuit of this lifelong distinction of excellence. Similar to the Olympics, the three-day contest takes place every four years and it requires that the chefs not only have extraordinary skill and nerves of steel but also a lot of luck.

Filmmakers DA Pennebaker and Chris Hegedus secured exclusive access to shoot this epic, never-before-filmed test of France's finest artisans. The film follows chef Jacquy Pfeiffer, co-founder of Chicago's French Pastry School, as he journeys back to his childhood home of Alsace to practice for the contest.

Two other finalists are profiled in the documentary - Regis Lazard, who was competing for the second time (he dropped his sugar sculpture the first time), and Philippe Rigollot from Maison Pic, France's only three-star restaurant owned by a woman.

During the gruelling final competition, chefs work under constant scrutiny by master judges and the critical palates of some of the world's most renowned chefs evaluate their elaborate pastries. Finally, these pastry marathoners racing the clock must hand-carry all their creations including their fragile sugar sculptures through a series of rooms to a final buffet area without shattering them.

The film captures the high-stakes drama of the competition - passion, sacrifice, disappointment and joy - all in the quest to become one of the Kings of Pastry.