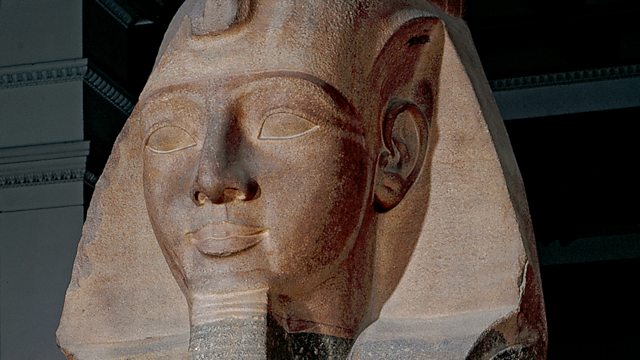 The Beginnings of Science and Literature

A History of the World in 100 Objects

Neil MacGregor of the British Museum presents five more items in his history of humanity told through the objects it's made. This week, self-expression through words and numbers.

Another chance to hear the Director of the British Museum, Neil MacGregor, retell the history of human development using 100 selected objects from the Museum. He begins with a small tablet found in modern Iraq and brought back to the British Museum. When it was translated, back in 1872, it turned out to be an account of a great flood that significantly pre-dated the famous Biblical tale of Noah. This discovery caused a storm around the world and led to a passionate debate about the truth of the Bible - about story telling and the universality of legend.

Neil then moves on to describe the British Museum's most famous mathematical papyrus. This shows how and why the ancient Egyptians were dealing with numbers around 1550 BC. This papyrus contains 84 different calculations to help with various aspects of Egyptian life, from pyramid building to working out how much grain it takes to fatten a goose. He describes it as "a crammer for a dazzling career in an ancient civil service".

The omnibus porgramme then arrives in Crete around 1700BC and tells the story both of man's fascination with bulls and the emergence of one of most cosmopolitan and prosperous civilisations in the history of the Eastern Mediterranean - the Minoans. The Minoans of Crete were more powerful than the mainland and enjoyed a complex and still largely unknown culture. They enjoyed a ritual connection with bulls as well as with a rich bronze making tradition. To consider the Minoans and the role of the bull in myth and legend, Neil introduces us to a small bronze sculpture of a man leaping over a bull, one of the highlights of the British Museum's Minoan collection. He explores the vast network of trade routes in the Mediterranean of the time, encounters an ancient shipwreck and tracks down a modern day bull leaper to try and figure out the attraction!

In 1833 a group of workmen were looking for stones in a field near the village of Mold in North Wales when they unearthed a burial site with a skeleton covered by a crushed sheet of pure gold. For his fourth item in this programme, Neil tells the story of what has become known at the British Museum as the Mold Gold Cape and tries to envisage the society that made it. He has already described the contemporary courts of the pharaohs of Egypt and the palaces of the Minoans in Crete. Nothing like that seems to have existed in Britain of that time but he imagines a people with surprisingly sophisticated skills and social structures.

Finally, Neil stands under the British Museum's giant statue of the King Ramesses II, an inspiration to Shelly and a remarkable ruler who build monuments all over Egypt. He inspired a line of future pharaohs and was worshipped as a god a thousand years later. He lived to be over 90 and fathered some 100 children! Neil considers the achievements of Ramesses II in fixing the image of imperial Egypt for the rest of the world. And the sculptor Antony Gormley, the man responsible for a contemporary giant statue, The Angel of the North, assesses the towering figure of Ramesses as an enduring work of art