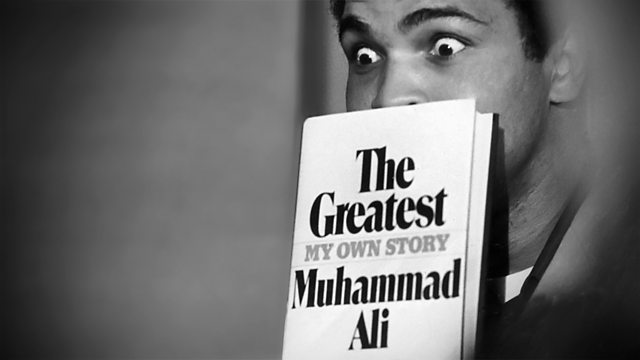 Ali: Me, My Family and Muhammad Ali

Musician Deirdre Pascall recalls meeting the boxer in 1976, and measures his impact on the black British population. From 2010.

When Deirdre Pascall went with her broadcaster father to the Savoy Hotel in March 1976 she was dreaming of getting a glimpse of her childhood hero, the World Champion boxer Muhammad Ali. Little did she know that once Ali had seen her she would be swept up and spend much of the press conference for the launch of Ali's autobiography 'The Greatest' sitting on the great man's knee.

Surrounded by the great and good of the British press with photographers crammed into the room she remembers the Champ asking her who he was. "You're the greatest" was her reply to his evident delight.

But the next day there were no pictures of her in the newspapers. They chose to stick with the shot of Ali and his book. Perhaps in the London of 1976 a little black girl wasn't felt to be a particularly British image?

Since then Deirdre has wondered much about that day. In this programme she goes in search of a the memories and in particular in search of a photograph of her meeting. But she also asks her father and her father's generation what they made of Ali's trips to the UK back then. He was already a superstar to most British people by that time, even if some of them found his abrasive language and powerful Islamic rhetoric disturbing. As a boxer he had no equals. But how important a figure was he to black Britons who had their own struggles and challenges, often very different from the ones that Ali represented back in the States?

Of course the reason for her trip to the Savoy in the first place was so that her father could get an interview with Ali for his BBC radio show 'Black Londoners'. Deirdre listens again to that recording in which a far more quietly spoken Ali talks to his British brothers. This isn't the showman who appeared on the Parkinson show, although his humour is there. This was an Ali listening and learning and probing and we'll hear it during the programme.

There are other issues for Deirdre as well. How does she feel now about her hero's stance on the place of women, on integration, on religion? And why is that Savoy meeting with a boxer so important to a woman who went on to train as a classical pianist?