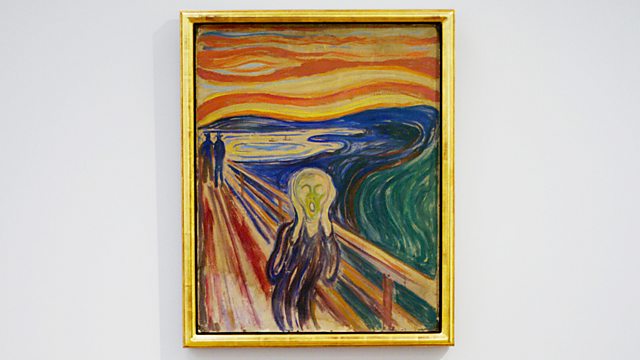 Munch and The Scream

Melvyn Bragg and guests David Jackson, Dorothy Rowe and Alastair Wright discuss the work of the Norwegian artist Edvard Munch, focusing on his painting The Scream.

Melvyn Bragg and guests David Jackson, Dorothy Rowe and Alastair Wright discuss the work of the Norwegian artist Edvard Munch, focusing on his most famous painting, The Scream.First exhibited in 1893 in Berlin, The Scream was the culmination of Munch's magnum opus, a series of paintings called The Frieze of Life. This depicted the course of human existence through burgeoning love and sexual passion to suffering, despair and death, in Munch's highly original, proto-expressionist style. His titles, from Death in the Sickroom, through Madonna to The Vampire, suggest just how directly and unironically he sought to depict the anxieties of late-19th century Europe.But against all Munch's images, it is The Scream which stands out as the work which has seared itself into the Western imagination. It remains widely celebrated for capturing the torment of existence in what appeared to many in Munch's time to be a frightening, godless world.Munch himself endured a childhood beset by illness, madness and bereavement. At 13, he was told by his father that his tuberculosis was fatal. But he survived and went on to become a major figure first in the Norwegian, then the European, avant-garde. He became involved with two of the great playwrights of the period. He collaborated with his fellow countryman Henrik Ibsen and became a close friend of the tempestuous Swede August Strindberg. He admired the work of Post-Impressionist painters such as Paul Gauguin and Vincent van Gogh and the philosophy of Friedrich Nietzsche, all of whom influenced his art. Munch's own influence resonated through the 20th century, from German Expressionism to Andy Warhol and beyond. His work, particularly The Scream, remains powerful today.David Jackson is Professor of Russian and Scandinavian Art Histories at the University of Leeds; Dorothy Rowe is Senior Lecturer in the History of Art at the University of Bristol; Alastair Wright is University Lecturer in the History of Art at St John's College, University of Oxford.