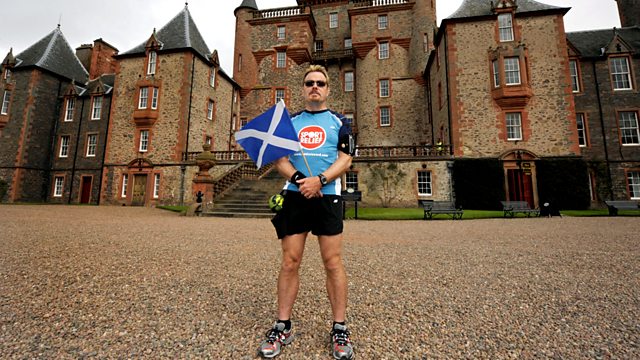 Eddie Izzard runs 43 marathons in 51 days to raise money for Sport Relief. Just three days into his run his body begins to crumble and only fierce determination carries him on.

Eddie Izzard is an actor, comedian and part-time transvestite, but no one thought he was much of an athlete. Until he decided to go for a run - a very, very long run.

This three-part documentary series follows Eddie rising to the challenge for Sport Relief and running an astonishing 43 marathons in 51 days. Covering 1166 brutal miles around the United Kingdom he runs a marathon a day, six days a week for eight weeks. Professional athletes would struggle with this task, but for Eddie, an out-of-shape 47 year old, it seems impossible. He had never run a timed marathon before and gives himself just over five weeks to train.

Eddie, trailed by his very own bespoke ice cream van, encourages the nation to donate to Sport Relief and run with him, so he meets the weird and wonderful British public in the most unlikely of places. Followed by a small support team and a film crew on a motorised rickshaw, every mile of his challenge is recorded and they are with him when the physical and mental strains of completing consecutive marathons start to show.

In the first episode we get the lowdown on what drives Eddie to keep running, and he meets the medical advisors and sports therapist who have the task of trying to turn him into an athlete.

He sets off west from London, but just three days into his run his body begins to crumble. Riddled with blisters and injuries, only fierce determination carries him on. But in the pursuit of completing a challenge many deemed impossible, he struggles against severe weather and an unforgiving terrain.

The journey takes Eddie to places from his past that hold significant memories. He makes a moving return to his old house in Skewen in Wales, where his mother spent her last days, and faces an epic climb into the Brecon Beacons to complete 277 miles, 10 marathons in 11 days. However, he's still got another 33 marathons to go.

Is this a heroic feat for Sport Relief or the deranged scheme of a madcap comedian?

This is a lunatic adventure. The incredible story of a transvestite comedian rising to one of the most astonishing challenges in Sport Relief's history, and in doing so achieving something truly extraordinary and utterly inspirational.