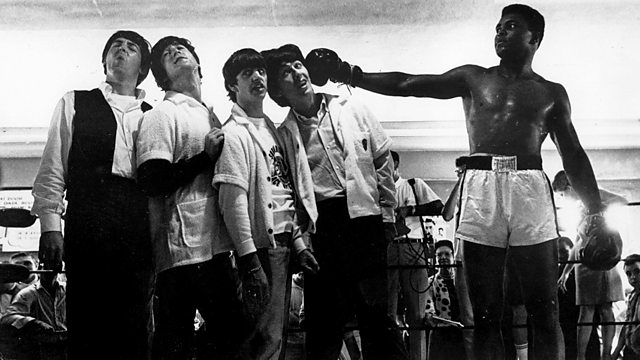 When Cassius Met The Beatles

John Wilson gathers eye-witness memories of the famous 1964 meeting between boxer Cassius Clay and the Fab Four. From March 2010.

The tale of an unexpected encounter between 20th century legends - a meeting which created a new template for global celebrity.

February 1964: The Beatles fly into Miami, sparking Beatlemania as they prepare to perform on The Ed Sullivan Show.

Meanwhile in a low-rent Miami gym, the underdog Cassius Clay trains to fight reigning champion Sonny Liston for the world title. The pundits say Clay hasn't a hope. Quite unexpectedly, the paths of these legendary figures cross.

British photographer Harry Benson arranges for The Beatles to visit Cassius Clay in the gym. Clay picks up Ringo and swings him around the ring as if he's no heavier than a toddler, as the other band-members lie at his feet. Clay pretends to knock all four Beatles down with a single punch. The resulting images remain in the memory long after this brief encounter.

The Beatles triumph on TV. Cassius Clay amazes all the boxing writers by defeating Liston. They suddenly both find themselves on the cusp of a new kind of stardom - they're young, outspoken and able to capture the global imagination.

John Wilson reports from Miami on the background to this unique encounter, with the memories of three people who were there at the time: photographer Harry Benson, who was travelling with the Beatles, writer Robert Lipsyte, who was covering the fight for the New York Times as a rookie reporter, and fight doctor Ferdie Pacheco, then working at the gym in Miami. All witnessed the moment when Cassius met The Beatles. John also taps the memories of Paul McCartney.