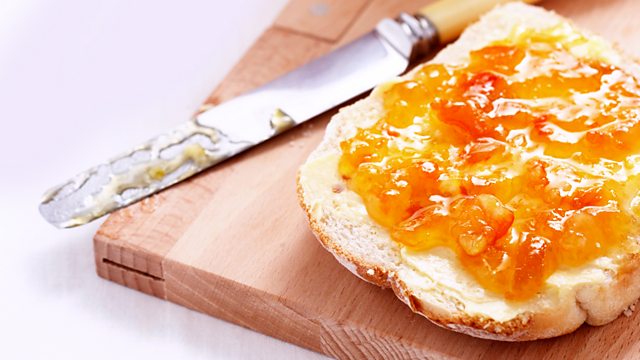 Marmalade is a uniquely British food, spread thick on the morning toast. But marmalade has been a declining market for many years, eaten primarily by the over-45s, and suffering under the relentless expansion of cereals, and sweeter spreads. Simon Parkes explores moves to restore toast's most noble partner to its rightful place at the breakfast table, from the domestic to the industrial.

The annual Marmalade Festival at Dalemain House in Cumbria was founded by Jane Hassel McCosh to celebrate domestic and artisan marmalade production. Judy Merry meets participants and judges, including baker Dan Lepard. Some of the winning marmalades are available at Fortnum and Mason in London, including Wild and Fruitful Lemon and Lavender.

In the studio Simon is joined by food historian Ivan Day to discuss the history of marmalade, Clare Simpson, senior consultant with the branding agency Dragon Rouge, to assess its image problem, and food columnist and Tom Parker Bowles, author of Full English: A Journey Through the British and their Food.